An Olympic Fencer Inspired A First For Barbie 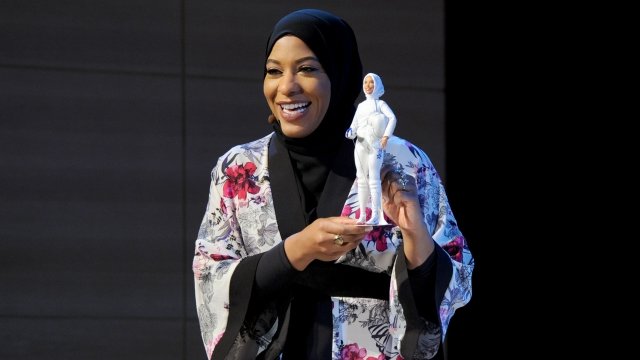 SMS
An Olympic Fencer Inspired A First For Barbie
By Katherine Biek
By Katherine Biek
November 14, 2017
The upcoming doll is based on fencer Ibtihaj Muhammad, the first U.S. Olympian to compete while wearing a hijab.
SHOW TRANSCRIPT

Next year Barbie will wear a hijab for the first time in her almost 60-year history.

The upcoming doll is based on fencer Ibtihaj Muhammad. At the 2016 Olympic Games in Rio de Janiero, she became the first U.S. Olympian to compete while wearing a hijab. Muhammad won the bronze medal in the women's team saber competition.

"Ibtihaj is an inspiration to countless girls who never saw themselves represented, and by honoring her story, we hope this doll reminds them that they can be and do anything," Sejal Shah Miller, vice president of global marketing for Barbie, said in a statement.

The Olympian's doll is part of Barbie's Shero collection, which already includes figures based on prominent women, such as ballerina Misty Copeland, director Ava Duvernay and Tony-winner Kristin Chenoweth.

Mattel's made significant strides in diversifying its Barbie lineup over the past couple of years by releasing dolls with multiple body types, skin tones and face shapes. In January, Barbie's longtime boyfriend, Ken, got a similar makeover.

Mattel also doubled down on its efforts to represent different cultural backgrounds via its American Girl doll collection.

Besides adding a boy doll this year, it introduced its first Korean-American doll and its first native Hawaiian doll.