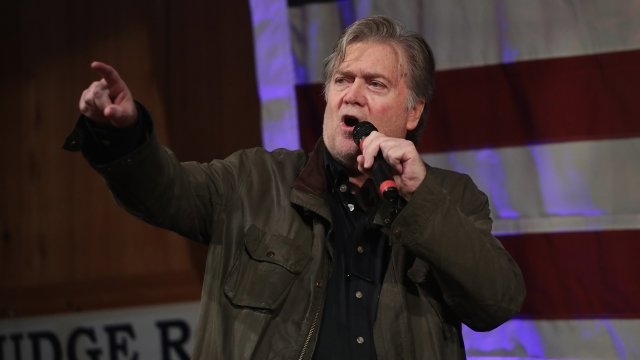 President Donald Trump's former chief strategist and current head of Breitbart, Steve Bannon, is getting serious about his war against the "swamp creatures" in Washington, D.C.

Bannon has been traveling across the country for weeks, courting Republican donors before the 2018 Republican primaries. Bannon wants to build a war chest for those who challenge establishment candidates — but he also wants to convince GOP megadonors to stop funding anything Mitch McConnell backs.

It's still early for Bannon, and it's not clear how much money he's secured, if any. But he's met with dozens of big names, including one of the GOP's most prolific donors, Sheldon Adelson. Bannon also met with personal allies Robert Mercer and his family, who'll probably foot a lot of the 2018 bill.

Establishment Republicans aren't sweating Bannon's campaign yet: They're still focused on quieting dissent with a tax reform bill. But the threat of a primary challenge could hamper the party's efforts to fend off hopeful Democrats in next year's election.

Bannon picked the perfect time to try to pick up upset donors. Some big names are really unhappy with the GOP's lack of legislative wins this year, despite the party holding all levers of power. And they've threatened to jump ship for weeks now.

Money will be a big part of Bannon's war chest, but it's nowhere near the only one. In fact, he's said, "Money doesn't matter anymore." Translation? He'll also keep pushing discontent within the party through the midterm elections. Don't forget, he runs a media organization that already has a reputation of sowing anger on the right.