Banks Work To Raise Inflation, Media Works To Explain Why 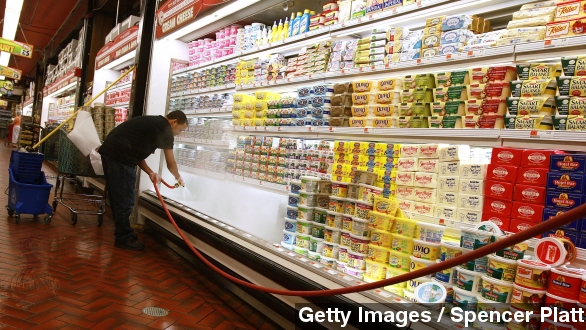 From Europe, to Japan, and back home again, inflation has been in the news this week.

But whereas conversations about inflation used to sound like this.

RONALD REAGAN VIA HISTORY CHANNEL: "It's clear that there's one problem that cuts evenly across the board, hurting everybody. And that's the common enemy of inflation."

RICHARD QUEST VIA CNN: "Inflation, well under the boil. Under the 2 percent level. That's what the Fed's aiming for. So far down."

And that's tasked media outlets with the challenge of explaining why inflation in 2014 isn't such a bad thing after all.

DAVID WEINBERG: "Inflation is a lot like candy. A little bit here and there makes your life so much better. But as millions of kids are about to find out, too much candy leads to ruin. Right now Japan is like a kid at your doorstep holding out a trick or treat bag."

NPR spoke with a butcher in Spain to illustrate how European deflation might require corrective action from the European Central Bank.

JAVIER OROZ RODRIGUEZ: "We've lowered our prices in various stages bit by bit so now we're charging about 10 percent less than we did a few years ago. It's really difficult because I've got expenses. So it's tough."

And The Wall Street Journal noted that while the Fed is aiming for 2 percent inflation, it's now come in under that target for 29 consecutive months.

So what has changed our thinking about inflation, and why does the government want more of it?

New York Times columnist Floyd Norris suggested the failure of old habits, saying: "A generation of economists and central bankers who lived through the 1970s learned that there is a large risk from runaway inflation and that steps must be taken to stop it before it gets out of control."

That mentality, he argues, led to economic blunders made by the Swedish Central Bank and the European Central Bank.

And some economists, like the president of Minneapolis' Federal Reserve Bank, agree. He said in a recent speech: "In my view inflation below 2 percent is just as much of a problem as inflation above 2 percent."

But others, like economist Nancy Lazar, are careful to distinguish between "bad deflation" – like wage drops in Europe – and "good deflation," as we may see from falling energy prices in the U.S. (Video via Bloomberg)

So while the tables may not have turned completely on inflation, its nuances have become a larger part of the conversation.