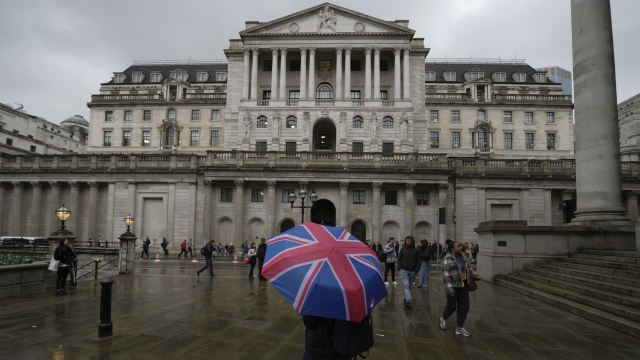 The Bank of England boosted its key rate by three-quarters of a percentage point, to 3%, after consumer price inflation soared to a 40-year high.

The Bank of England made its biggest interest rate increase in three decades Thursday, joining the U.S. Federal Reserve and other central banks worldwide in rapid hikes as it tries to beat back stubbornly high inflation fueled by Russia’s invasion of Ukraine and the disastrous economic policies of former Prime Minister Liz Truss.

The central bank boosted its key rate by three-quarters of a percentage point, to 3%, after consumer price inflation returned to a 40-year high in September. The aggressive move comes even as the bank predicted a two-year economic contraction through June 2024, which would be the longest recession since at least 1955, according to the Office for National Statistics.

“If we don’t take action to bring inflation down, it gets worse," Bank of England Gov. Andrew Bailey told reporters. “There’s no easy outcome in this sense.”

Even so, the central bank should not increase its key rate too far, he said, but with uncertainties ahead, policymakers will “respond forcefully" if needed.

Consumer prices in the 19-country eurozone were up from an annual 9.1% in August. One year ago, inflation was as low as 3.4%.

The interest rate decision is the first since Truss’ government announced $52 billion of unfunded tax cuts that sparked turmoil on financial markets, pushed up mortgage costs and forced Truss from office after just six weeks. Her successor, Rishi Sunak, has warned of spending cuts and tax increases as he seeks to undo the damage and show that Britain is committed to paying its bills.

“High energy, food and other bills are hitting people hard. Households have less to spend on other things. This has meant that the size of the UK economy has started to fall,” the bank said in its November monetary policy report.

The rate increase is the Bank of England’s eighth in a row and the biggest since 1992. It comes after the U.S. Federal Reserve on Wednesday announced a fourth consecutive three-quarter point jump as central banks worldwide combat inflation that is eroding living standards and slowing economic growth.

Central banks have struggled to contain inflation after initially believing that price increases were being fueled by international factors beyond their control. Their response intensified in recent months as it became clear that inflation was becoming embedded in the economy, feeding through into higher borrowing costs and demands for higher wages.

The war in Ukraine boosted food and energy prices worldwide as shipments of natural gas, grain and cooking oil were disrupted. That added to inflation that began to accelerate last year when the global economy began to recover from the COVID-19 pandemic.

Europe has been particularly hard hit by a jump in natural gas prices as Russia responded to Western sanctions and support for Ukraine by curtailing shipments of the fuel used to heat homes, generate electricity and power industry. and European nations competed for alternative supplies on global markets.

The U.K. also has struggled as wholesale gas prices increased fivefold in the 12 months through August. While prices have dropped more than 50% since the August peak, they are likely to rise again during the winter heating season, worsening inflation.

The British government sought to shield consumers with a cap on energy prices. But after the turmoil caused by Truss’ economic policies, Treasury chief Jeremy Hunt limited the price cap to six months instead of two years, ending on March 31.

Meanwhile, food prices have jumped 14.6% in the year through September, led by the soaring cost of staples such as meat, bread, milk and eggs, the Office for National Statistics said. That pushed consumer price inflation back to 10.1%, the highest since early 1982 and equal to the level last reached in July.

Increases in the cost of tea bags, milk and sugar mean that even the “humble” cup of tea, which people across the country turn to when they need a break from the pressures of daily life, is getting more expensive, the British Retail Consortium said Wednesday.

“While some supply chain costs are beginning to fall, this is more than offset by the cost of energy, meaning a difficult time ahead for retailers and households alike,” said Helen Dickinson, the consortium's chief executive.

Truss’ failed economic plan made things worse, driving the pound to a record low against the dollar, threatening the stability of some pension funds and triggering predictions that the Bank of England would boost interest rates higher than expected. That increased mortgage costs as lenders repriced their products.

The economic turmoil is putting homeownership further out of reach for many young people, according to research released this week by Hamptons, a U.K. real estate agency.

Mortgage rates average around 6.5%, compared with 2% a year ago.

That means the average first-time homebuyer would have to make a down payment equal to 41% of the purchase price to keep their monthly repayments at the same level as a similar buyer who made a 10% down payment last year, Hamptons said.