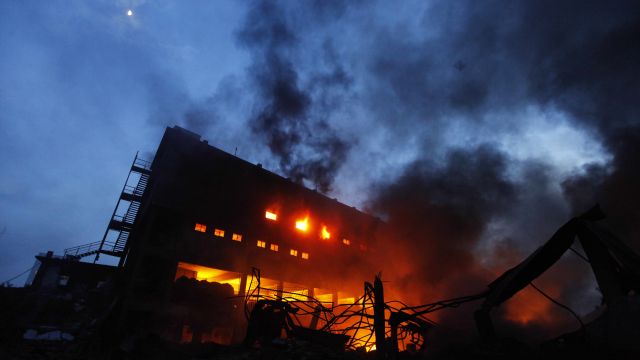 SMS
Bangladesh Factory Collapses After Catching Fire
By Matt Picht
By Matt Picht
September 10, 2016
At least 23 people have been killed, and authorities expect that number to rise.
SHOW TRANSCRIPT

A multistory factory in Bangladesh collapsed Saturday after a boiler explosion engulfed the building in flames. At least 23 people were killed in the disaster, and officials fear the death toll will rise.

Police say about 100 people were working in the Tampaco Foils packaging building when the fire started in the early morning. Flammable chemicals stored in the factory accelerated the blaze; firefighters were still working to extinguish the fire Saturday evening.

Similar disasters have plagued Bangladesh's industrial sector in recent years. The collapse of a massive factory in Dhaka in 2013 killed over 1,100 people and led to an agreement to improve safety standards in the region.

The Daily Star reports this was the last day of work at the factory before the start of a weeklong vacation to mark the Muslim holiday Eid al-Adha.