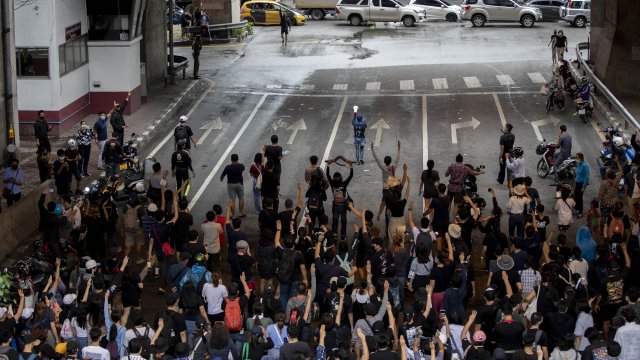 SMS
Bangkok Transit System Shut Down As City Sees Fourth Day Of Protests
By Alex Arger
By Alex Arger
October 17, 2020
The Thai Lawyers For Human Rights says 51 people have been arrested in connection to the protests.
SHOW TRANSCRIPT

Thousands of anti-government protesters filled Bangkok's streets Saturday for the fourth day straight, leading to a mass shutdown of the city's transit system.

The shutdown was an attempt to thwart protesters' plans to meet at Skytrain stations as groups have tried eluding police by planning assembly spots on social media before police have time to block them. Groups still met at multiple closed stations, establishing the protest's presence across the city.

Protesters are calling for the resignation of Prime Minister Prayuth Chan-ocha, who was elected in 2014. He gave the military the power to appoint a 250-member Senate, and protesters want a new constitution — one the military had no hand in creating. They're also seeking a dissolution of parliament and a curb of the palace's power.

On Friday, police used a water cannon against protesters who assembled across different points — despite an emergency decree banning public gatherings the day before. The prime minister said the state of emergency declaration was necessary because "certain groups of perpetrators intended to instigate an untoward incident and movement in the Bangkok area by way of various methods and via different channels, including causing obstruction to the royal motorcade." That's referencing an incident Wednesday where two activists were arrested for violence against the queen after heckling a slowly passing car carrying the queen and prince.

The Thai Lawyers For Human Rights says 51 people have been arrested in connection to the protests. The government is also planning to take legal action against those using Twitter and Facebook to announce the demonstrations.