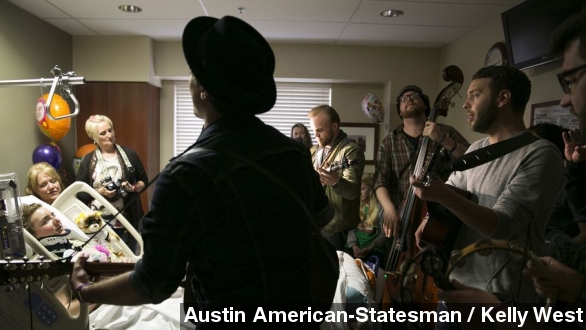 SMS
Band Gives SXSW Crash Victim Private Concert In Hospital
By Collin Ruane
By Collin Ruane
March 17, 2014
One of the victims in last week's deadly crash at the SXSW festival got the surprise of a lifetime in her hospital room — a private concert.
SHOW TRANSCRIPT

One of the victims in last week's deadly crash at the SXSW festival got the surprise of a lifetime in her hospital room — a private concert.

Eighteen-year-old Mason Endres was one of the more than 20 hurt in Thursday's crash. And because of her injuries — including a broken leg, a fractured neck and a broken nose — she wasn't able to see one of her favorite bands perform. (Via Austin American-Statesman)

So, after members of the band "Jared & The Mill" found out Endres was hurt and couldn't make it to their show, they decided to stop by the hospital and give her her own performance.

JARED KOLESAR: "This is just as much a treat for us as it is for anybody else to come in and play for someone who truly, truly loves our music." (Via KVUE)

KSAZ reports Endres met "Jared & The Mill" at last year's fest and kept in touch through the band's Facebook and Twitter accounts. And Endres could not be happier they stopped by to visit her.

ENDRES: "I felt like seeing everyone, including 'Jared & The Mill' has been ... I felt so great today. Like, I think just the pure excitement of everything has gotten me through today." (Via KXAN)

Over the weekend, KVUE reported several people, including Endres, were still in the hospital, with two still in critical condition after last week's accident. The drunken-driving suspect, Rashad Owens, is in custody. His bail was set at $3 million.