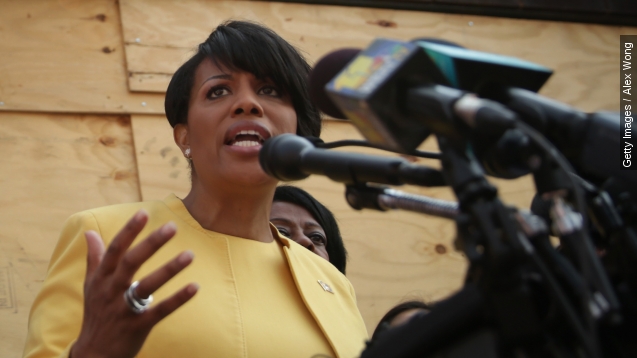 SMS
Baltimore Mayor Says She Won't Seek Re-Election
By Eugene Daniels
By Eugene Daniels
September 11, 2015
Baltimore's mayor says she won't be seeking re-election, and her term in office has been full of criticism.
SHOW TRANSCRIPT

"I've made the decision not to seek re-election."

In a surprise move Friday, Baltimore's Mayor Stephanie Rawlings-Blake said she would not be seeking re-election.

Rawlings-Blake said she wants to focus on reforming the police department and healing the racially divided city for the rest of her term, without worrying about the politics of the campaign trail.

"The last thing I want is for every one of the decisions I make moving forward, at a time where the city needs me the most, to be questioned in the context of a political campaign," she said in a press conference.

Rawlings-Blake has faced a ton of criticism for how she handled protests after Freddie Gray died in police custody, something she's never really apologized for. (Video via NBC)

"We also gave those who wish to destroy, space to do that as well," Rawlings-Blake said in a press conference.

"This is one of those moments where she'd been better off saying 'Boy I said that? That was a stupid thing to say. That is not what I meant to say.' I feel like she's gotten a little defensive about it," NBC's Chuck Todd said in April.

If she was to run, Rawlings-Blake would face some tough competition in the mayoral race, including former Baltimore mayor, Sheila Dixon and potentially the husband of Baltimore state attorney Marilyn Mosby, who is prosecuting the officers involved in the Freddie Gray case. Both Dixon and Mosby have been critical of Rawlings-Blake.

Rawlings-Blake will definitely keep busy during the rest of her term. Just this week, a judge announced the six officers charged in the Gray case would be tried in Baltimore.