Bakers Are Joining A Movement To Raise Money For Ukrainian Refugees 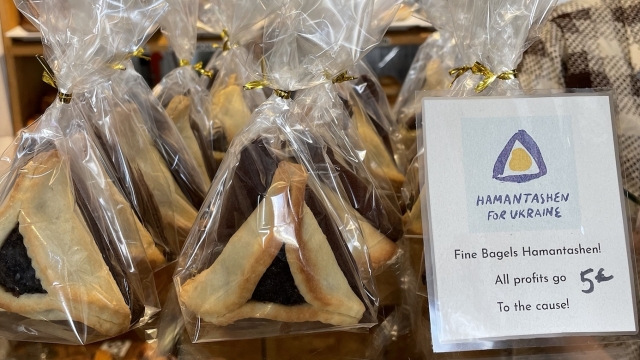 SMS
Bakers Are Joining A Movement To Raise Money For Ukrainian Refugees
By Ben Schamisso
By Ben Schamisso
March 15, 2022
Hundreds of Jewish bakers have joined the Hamantaschen for Ukraine campaign to help drive proceeds for those fleeing the war-ridden country.

For years, Chicago baker Sam Zeitlin has been whipping up hamantaschen cookies ahead of the Jewish holiday of Purim.

“Every year at around this time we get ready to make thousands of hamantaschen," Zeitlin said.

But this year, his baking has a special meaning.

“It allows me to connect with family and also show solidarity for the people of Ukraine," he said.

Zeitlin is one of hundreds of Jewish bakers worldwide participating in the Hamantaschen for Ukraine campaign, donating part of the proceeds to an organization helping Ukrainian refugees in Poland.

"I know that it goes to a really, really great place that's going to help people," he said.

Zeitlin’s own grandfather was born in Kyiv. Like today’s refugees, the baker’s ancestor was forced to flee the country as a child more than 100 years ago during the Russian revolution.

“My family felt like Ukrainians," Zeitlin said. "They also happened to be Jewish, but they felt like that was their homeland. And then having to leave, drop everything and get out."

Zeitlin says participating in the fundraising campaign is a way to honor his late grandfather while practicing his Jewish values.

The Hamantaschen for Ukraine movement started thousands of miles away from Zeitlin’s kitchen in Chicago. It was dreamed up by the American owner of a bagel shop all the way in Berlin.

“I made a website and made an Instagram, and I thought, maybe, maybe I’d get 20 people on board, but it's spreading like crazy, and I'm so happy about that," said Laurel Kratochvila, the founder of Hamantaschen for Ukraine.

Hundreds of bakeries across Europe and the U.S. are now participating, and the campaign is not limited to professionals.

“There's three times as many home bakers as what you see on the website," Kratochvila said. "People who are just selling out of their kitchen who are writing to me, ‘I just donated $500 through my sales.'"

Hamantaschen are cookies that Jews eat during Purim — a holiday that celebrates victory over a biblical ruler named Haman who wanted to obliterate the Jewish people.

Back in Chicago, Zeitlin is donating 15% of the proceeds of his poppyseed jam hamantaschen to the Polish humanitarian action through his delicatessen business.

His business has already raised money for HIAS, an international Jewish organization that supports refugees.

He says he expects Ukrainian refugees will arrive soon in Chicago, and when they get there, he’s ready to lend a hand, or break bread — or a hamantaschen.