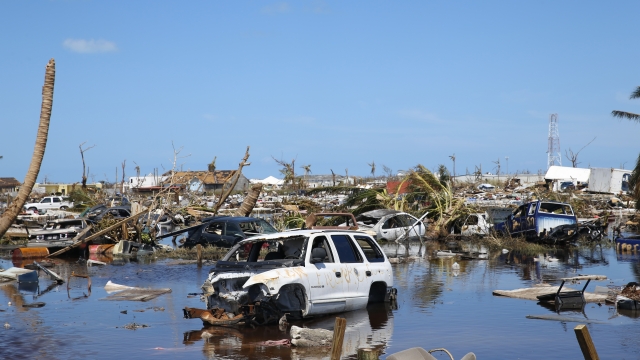 "My son and a couple of my other employees were in that building and the water just tore down the whole building. They had to jump out the back window. Some survived, some didn't," William Davis, resident of Marsh Harbour, Abaco Island said.

The official death toll in the Bahamas has risen to at least 44 people, but Bahamian officials are still waiting to see what the total destruction of Dorian will be.

Dorian made landfall in the Bahamas Sept. 1. After the Category 5 storm ravaged parts of the islands, massive amounts of debris have piled up on Abaco and Grand Bahama. Hundreds of people are still missing and as debris is moved, Bahamian Prime Minister Hubert Mannis says the death toll will rise "significantly."

CNN reported residents said they could see family and neighbors being swept away by flood waters. What were once homes have been completely flattened by the strongest storm to ever hit the Bahamas. And more than 70,000 people are reportedly homeless and displaced because of storm damage.

In an interview with MSNBC, Bahamian Health Minister Duane Sands said the public "needs to prepare for unimaginable information about the death toll and the human suffering."

Dorian made its way to the U.S. along the East Coast, but has weakened to a post-tropical cyclone since it made contact in Nova Scotia, Canada, on Saturday.

Correction: A previous version of this story misstated the landfall date and duration of the hurricane over the Bahamas. The story has been updated.