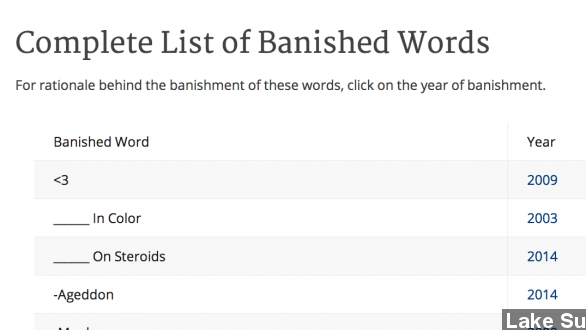 SMS
'Bae,' 'Enhanced Interrogation' Land On Banned-Words List
By Danny Matteson
By Danny Matteson
December 31, 2014
Michigan's Lake Superior State University is moving to ban many of those words you might have heard a little too often in the past 12 months.
SHOW TRANSCRIPT

You know how every year the dictionary adds a bunch of new, trendy words that were popular that year?

Well, this is kind of the opposite. Northern Michigan's Lake Superior State University is moving to ban many of those words you might have heard a little too often in the past 12 months.

LSSU compiled the list through nominations on its website and targets "pet peeves" from everyday speech, news and technology, among other categories. (Video via Lake Superior State University)

It's obviously not binding — just more of a suggestion.

And it's not new, either. Dubbed the "List of Words Banished from the Queen's English for Mis-Use, Over-use, and General Uselessness," it was actually created 40 years ago by a university public relations director at a 1975 New Year's party.

Also making the list this year was the word "nation" affixed to any sports team. You know, something like "Yankee nation" or "Red Sox nation."

And "polar vortex." We're guessing that's a term most of you wouldn't want to hear right now anyway. (Video via The Weather Channel)