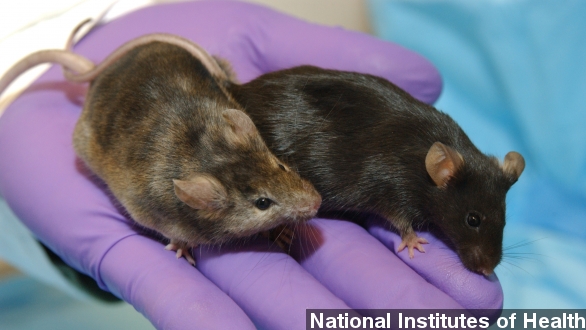 SMS
Bad Memories Turn Good In Weird Mouse Brain Study
By Steven Sparkman
By Steven Sparkman
August 27, 2014
MIT researchers were able to change whether bad memories in mice made them anxious by flicking an emotional switch in the brain.
SHOW TRANSCRIPT

Think about the last time you were on a roller coaster. You probably remember the time, the place, who you were with — and might also feel either excited or terrified, depending on whether you love or hate roller coasters.

That's because our memories don't exist in isolation. Our brains attach a lot of context to any given memory — including any strong emotions that go along with it.

Now, neuroscientists at Massachusetts Institute of Technology have been able to actually change those emotions in lab mice, thanks to a technique that lets researchers turn individual neurons on or off using blue light.

Basically, they were able to make the mice change their minds about a positive or negative memory.

Let's go back to the roller coaster again: if you had a good time, you're probably more inclined to want to go back to that theme park. If the ride scared the heck out of you, you would probably rather stay away. That's what the researchers were able to overcome in the mice.

You can read the details on MIT's website, but the team found by making a mouse relive a bad memory while something good was going on, the bad memory lost its sting. The process worked in the other way, too.

This isn't a technique we can run out and start performing on humans. The mice had to have their brains genetically altered and had fiber optics cable implanted inside their skulls. (Video via YouTube / eekolife)

But the new study helps shed light on how memory works, and maybe points the way toward new treatments for disorders like PTSD way down the line.

This video includes images from Getty Images and National Institutes of Health.