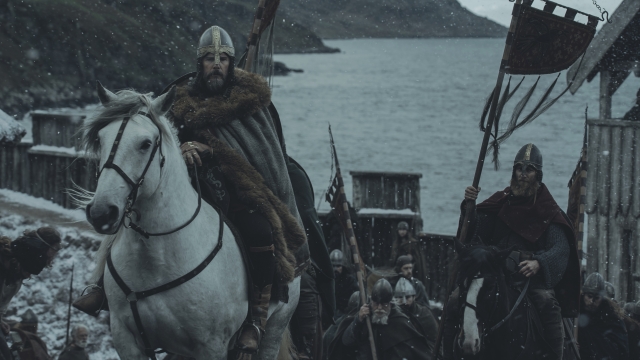 On an unusually crowded weekend at movie theaters that featured a pricey Viking epic and Nicolas Cage playing himself, DreamWorks Animation's "The Bad Guys" bested the field, signaling a continued resurgence for family moviegoing after a downturn during the pandemic.

"The Bad Guys," released by Universal Pictures, debuted with $24 million in U.S. and Canada ticket sales, according to studio estimates Sunday. That came despite steep competition for families from Paramount Pictures' "Sonic The Hedgehog 2," which stayed in second place with $15.2 million its third week of release. It's grossed $145.8 million domestically thus far.

The apparent health of family moviegoing is especially good news for Hollywood as it heads into its lucrative summer season when films like Universal's own "Minions: Rise of Gru" and Walt Disney Co.'s "Lightyear" — the first Pixar film opening in theaters in two years — hope to approach pre-pandemic levels.

"There's reason for being more than cautiously optimistic," said Jim Orr, head of distribution for Universal. "I think audiences this summer are going to be flooding into theaters."

While studios have been hesitant to program many films against each other during the pandemic, the weekend saw a rarity: three new wide releases, all of them well-received, none of them sequels or remakes.

"The Bad Guys," based on Aaron Blabey's children's graphic novel series about a gang of crooked animals with a Quentin Tarantino-for-kids tone, fared well with critics (85% fresh on Rotten Tomatoes) and audiences (an "A" CinemaScore). With little family competition until the release of "Lightyear" in mid-June, "The Bad Guys" should play well for weeks. Having first debuted overseas, the animated film has already grossed $63.1 million internationally.

The weekend's other new releases — Robert Eggers' "The Northman" and the Cage-starring "The Unbearable Weight of Massive Talent" — didn't do as well but still fared reasonably solidly in their first weekend.

"Every weekend is a building block in the recovery, but I don't even want to call it a recovery. I think movie theaters are recovered. We're pretty much there," said Paul Dergarabedian, senior media analyst for ComScore. "Three newcomers were all well-received, and all of them found an audience."

The risks were greatest for Focus Features' "The Northman," which saw its budget balloon beyond $70 million, a major increase in scale for Eggers, the director of previous indie historical horrors "The Witch" and "The Lighthouse." The film's path to profitability was unlikely even before launching in theaters, but it opened on the higher side of expectations with $12 million in ticket sales. It added $6.3 million internationally in 26 territories.

"First and foremost, we wanted to work with Robert Eggers," said Lisa Bunnell, head of distribution for Focus, which had handled international distribution for Eggers' first two films. "The key here is that we got to make a film that we wanted to make with a filmmaker we feel is part of the future of American cinema. He's got a very distinctive voice. He's making film with original IP, not just going in: 'Let's make a sequel!'"

Meanwhile, a new installment in a once all-powerful brand, the Harry Potter spinoff "Fantastic Beasts: The Secrets of Dumbledore," fell off a cliff in its second weekend in theaters. The Warner Bros. release, the third "Fantastic Beasts" movie, dropped 67% in its second week with $14 million. That's a bad sign for the future of the franchise, should it be continued by Warner Bros. (The studio has thus far held off on greenlighting a fourth film.) Still, "Secrets of Dumbledore," last week's top film, is doing better overseas. International sales of $213.2 million account for the lion's share of the film's $280.3 million global haul.

Lionsgate's "The Unbearable Weight of Massive Talent," a gonzo meta comedy starring Cage as an exaggerated version of himself, opened with an estimated $7.2 million. The film, which first launched to warm reviews out of South by Southwest, will depend on good word of mouth to approach netting its $30 million budget.

That's the kind of success that "Everything Everywhere All at Once" has had. The A24 release, a madcap metaverse fantasy starring Michelle Yeoh, has been one of the brightest signs for the specialty film business, another sector of the industry that struggled theatrically during the pandemic. In its fifth week, "Everything Everywhere All at Once" grossed $5.4 million, a drop of just 12% from the week prior.

But the biggest breakthrough in theaters this April has been for family moviegoing. It's good timing for the film industry, which will this week convene in Las Vegas for CinemaCon, the annual convention and trade show for trumpeting theatrical exhibition. Expect plenty of proclamations that movie theaters are back.

Estimated ticket sales for Friday through Sunday at U.S. and Canadian theaters, according to Comscore.