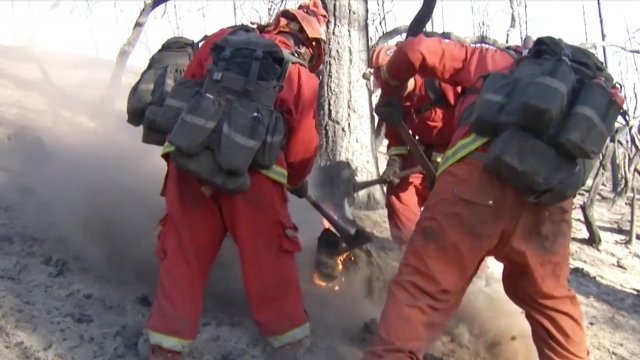 By Cat Sandoval
November 21, 2018
Inmate firefighters risk their lives to help fight fires. But once they've served their time, becoming a full-time firefighter can be tough.
SHOW TRANSCRIPT

As the blazes in California rage on, hidden heroes are working alongside civilian firefighters: inmate firefighters.

The inmate firefighter program has been going strong for more than 70 years. But after prisoners complete their sentence, the road to becoming a full-time firefighter can be difficult.

Here's how it works: Inmates can volunteer to be part of the Conservation Camp Program. It's open to prisoners with sentences of five years or less, but people convicted of sexual offenses, arson or violent crimes are automatically disqualified. This year, there are about 3,700 inmates in the program. 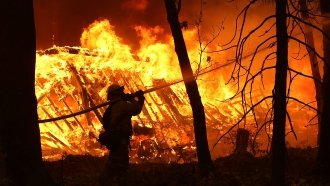 Dante Youngblood, an inmate firefighter, said: "Yes. [It's] a dollar an hour when you're fighting the fire. ... The time cut is more than the money for us."

Reduced sentences can be strong incentives for some inmates, as can a little more freedom — fire camps don't look like prisons.

"These guys are out there working hard right along line with the firefighters saving lives and homes," said Tracy Snyder from the California Department of Corrections.

But inmate firefighters may be more likely to get hurt than their civilian counterparts. A recent Time report says "inmates were four times as likely ... to incur object-induced injuries, such as cuts, bruises, dislocations and fractures."

And despite their experience, an inmate firefighter may find it tough to land a full-time job after they complete their sentence. Depending on the fire department, applicants may be automatically disqualified based on felony or misdemeanor convictions. Others may be ineligible due to licensing laws. One prisoner rights advocate told Axios, "To become a firefighter, most departments require an EMT license, but EMT certifying boards have a pattern of denying applicants with a criminal history." 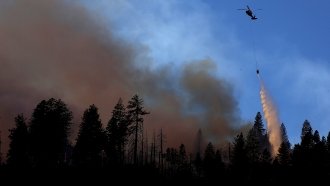 A California bill introduced earlier this year would have established a framework to help some ex-offenders get certifications, but the bill was watered down to collect data on people being denied instead.

While becoming a firefighter after serving time can be difficult for some, it isn't impossible.