'Back To The Future' Musical Coming To London In 2015 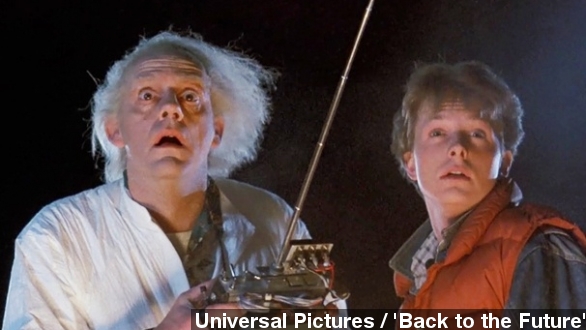 SMS
'Back To The Future' Musical Coming To London In 2015

By Briana Koeneman
January 31, 2014
The people who brought you "Back to the Future" are revving up the old Delorean to 88 miles per hour — but this time, on stage.
SHOW TRANSCRIPT

The people who brought you "Back to the Future" are revving up the old Delorean to 88 miles per hour — but this time, on stage.

"'Back to the Future,' it's going to be hitting the stage now. Yes, a musical version is expected to open in London next year, marking the 30th anniversary of the film." (Via WHEC)

According to The Verge, the classic movie's original director and screenwriter Robert Zemeckis will join forces with co-writer Bob Gale to write the musical's book.

And Gale confirmed on BTTF.com that it will include music from the original movie plus some new stuff by Alan Silvestri and Glen Ballard.

Zemeckis says he and Gale have been trying to get "Back to the Future" on stage for about ten years now.

"You know how they bring back movies as Broadway musicals? Seems like 'Back to the Future' would make a great Broadway show. So, someday maybe that will happen." (Via RCM Media)

But according to the Daily Mail, things finally clicked once the two met London-based director Jamie Lloyd and producer Colin Ingram. Gale says, "We met Brits, and we met Americans, but we decided on the Brits — Jamie and Colin — because they’re seeing our material through slightly different cultural eyes."

No word on just how closely the musical will follow the movie's plot, but Llyod says the musical version will be a "unique" adaptation.

He explained on BTTF.com, "Rather than attempt to recreate such an iconic movie on stage, we have assembled a brilliant artistic team to discover a unique theatrical language to take audiences on a journey through time in a vibrant, unexpected way."

Marty McFly is expected to take off in London's West end at first, and if that goes well, the musical could head to Broadway next.