Bachelor Lindsey Graham Says His Sister Could Be First Lady 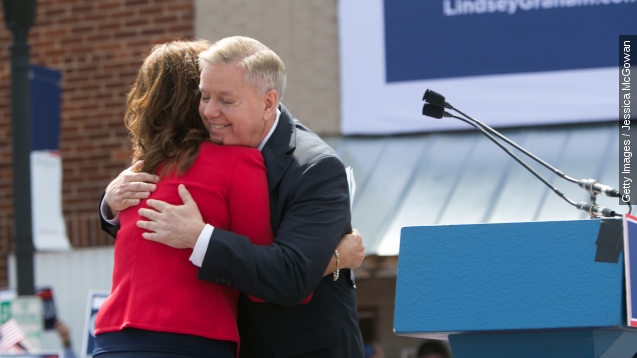 SMS
Bachelor Lindsey Graham Says His Sister Could Be First Lady
By Zach Toombs
By Zach Toombs
June 9, 2015
The senator from South Carolina would be the first bachelor elected president in more than a century.
SHOW TRANSCRIPT

"It is truly my honor to present to you the next president of the United States, Lindsey Graham," his sister Darline Graham Nordone said.

Lindsey Graham has already made his sister part of his campaign for the presidency.

And the election's only bachelor says, if he wins, she'll be part of America's first family.

When asked who his first lady would be, Graham told the Daily Mail, "Well, I've got a sister, she could play that role if necessary."

The senator from South Carolina would be the first bachelor elected president since Grover Cleveland in 1884, though he was married shortly after taking oath. Elected in 1856, James Buchanan was a lifelong bachelor. And actually, his niece Harriet Lane served as first lady during his one term.

The first lady really does do a lot — from healthy living campaigns like Michelle Obama's ...

and occasionally some fun stuff.

"Turnip for what?" Those were the spoofed lyrics to a parody of the popular song.

Anyway, Graham and his sister, Darline Graham Nordone, are definitely close — and she's playing a supporting role in his campaign when she's not working her day job in public relations.

But Graham also says she's not the only option, telling Daily Mail, "I've got a lot of friends. We'll have a rotating first lady."