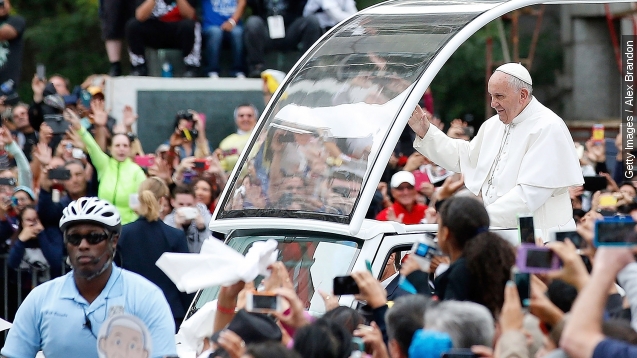 A Philadelphia baby given just months to live was kissed by Pope Francis during a parade. Months later, her family says brain scans show improvement.

A Philadelphia baby born with an inoperable brain tumor was given months to live. But after Pope Francis kissed her on the head, the family says her tumor has shrunk to the point that it's hard to see.

Gianna Masciantonio's condition is so rare, only five babies are born with it in the U.S. each year. The 1-year-old had already been through eight surgeries and several chemotherapy sessions before the pope's visit to the U.S. in September. (Video via ABC)

On the day of the papal parade, a family friend in the FBI was able to get the pope's motorcade to stop near the Masciantonio family. Gianna's father held her high above his head, and a body guard brought her to the pope, who kissed her on the head and blessed her.

"I think all of this is from God. You know, the pope is just a messenger from God," Gianna's father told KYW-TV.

And now, just a few months later, the family says MRIs show the unimaginable. Compared to ones taken in August, they say scans in November showed a fraction of the tumor that was once there. (Video via KYW-TV)

Gianna's mother told ABC, "Pope Francis kissing her was my miracle, was the way of God telling me he was with us."

Gianna's prognosis has improved considerably. And while the Masciantonio family considers the papal kiss to be God's work, they told NBC the biggest miracle were the doctors "who, ultimately, played a major role in saving Gianna's life."