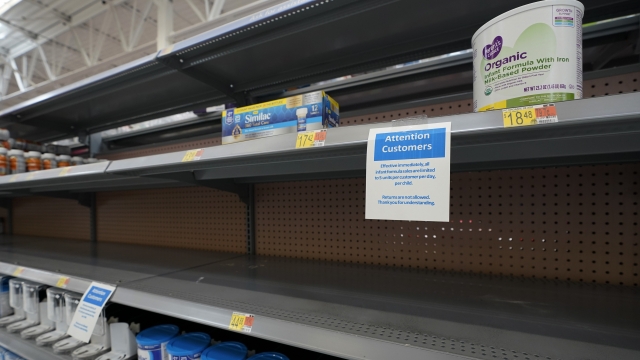 Though it's easier to get now, families are still finding empty shelves when searching grocery stores for baby formula.

The baby formula shortage is still creating challenges for families across the country.

Though it's easier to find in most parts of the U.S. now than it was back in the spring, the shortage isn't completely over.

In some regions of the country, parents in search of baby formula in their local store are still finding empty shelves, and not every brand has been able to get back up to 100% just yet, which can have huge consequences for parents who rely on specific formulas to keep their babies healthy.

Data from late October released by market research firm IRI Worldwide found that 87% of store shelves had baby formula back in stock. That's near the level from before the shortage and well above the low of 69% from near the peak of the shortage in the summer.

But just because it's on the shelves doesn't mean it's easy to find everywhere.

A U.S. Census Bureau survey found that the shortage still looks fairly dire for many parents. Their data showed that nearly a third of families with infant children reported they had trouble obtaining it in September, and nearly one in five households has less than a week of formula at home.

The FDA will also seek new authority to compel companies to turn over key information.

The formula shortage was an issue originally tied to the long-running global supply chain crisis, but it spiked in February after a voluntary recall by the formula manufacturer Abbott. They were responding to four reports of a dangerous bacteria found in formula produced at their Michigan plant.

Abbott produces 43% of formula in the U.S., and the Michigan plant where it stalled production is the company's largest facility.

The market for formula in the U.S. is pretty concentrated as well, with 90% of formula being made by just four companies.

Families in need have an even narrower selection, as the USDA's Supplemental Nutrition Program for Women, Infants and Children, or WIC, gives out contracts to one company per state. Nearly half of the 1.2 million babies receiving WIC help had to rely on Abbott for their formula.

The federal government enacted several short-term solutions that have helped improve the flow of baby formula.

In addition to working with Abbott to reopen production at their facility, the White House allowed for baby formula to be flown in from other countries. Congress also passed a law loosening restrictions on what companies the WIC program has to rely on in order to help them get around the shortage.

However, a lot of those actions were taken to provide short-term solutions. Congress actively realized there wasn't time or bipartisan willingness to pass more comprehensive, long-term solutions.