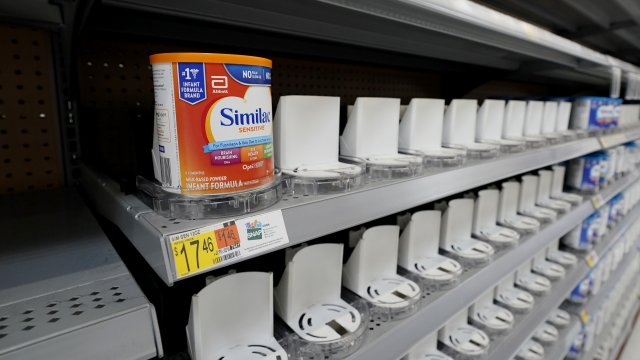 SMS
Parents Searching For Baby Formula Amid Shortage, FDA Recall
By James Packard
By James Packard
May 11, 2022
The White House says it's coordinating with manufacturers to get production ramped up fast.

"That's all I have," she said. "He goes through one tub every four days."

It's bad enough that her family is shipping formula to her Florida home from the Midwest. And she's scouring the earth in the meantime.

"It's literally like, a two-and-a-half hour drive like ... Well, where am I gonna find it?" she asked.

"Of all things to be in a shortage of ... Very stressful that it's formula," she said. "Like ... Having a baby in a pandemic and ... Here I am now, struggling with formula shortage."

A major recall came down on one of the most precious commodities for parents. Now, some 40% of baby formula is out of stock.

Stemming from an FDA recall of major brands after several babies got rare infections from Abbott Nutrition formulas.

On top of an already finicky supply chain, it's causing panic.

"I would not ever recommend making your own formula at home. That's come up," she said.

Beene says not using formula properly can have lasting health implications for babies. So, don't dilute formula to make it last longer. But, parents shouldn't be afraid to switch brands if it's all they can find.

As always, talk to your pediatrician first.

"Your baby might not immediately love it if it’s not what they're used to, but from a medical perspective it's safe to change formula brands," Been continued.

The White House says it's coordinating with manufacturers to get production ramped up fast.

But in the meantime, parents have few places to turn as even food banks feel the pinch.

Debbie Gulley is the executive director of the East Nashville Cooperative Ministry.

"I don't know of any food bank, or any organization right now, that is giving formula," she said.