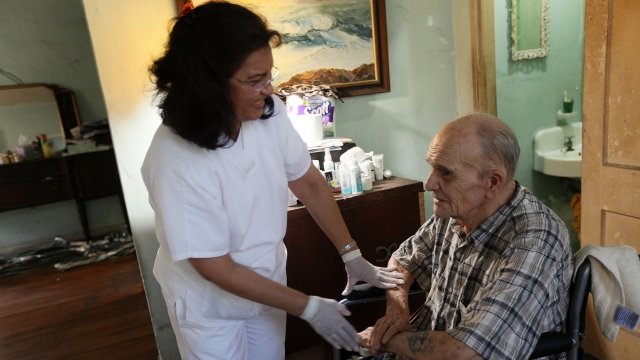 One of America's fastest-growing industries is on a collision course with one of the linchpins of President Trump's agenda. The first is home health aide positions, the latter is having less immigration.

The field is expected to increase by 38 percent in the next seven years. That's because baby boomers are likely going to need some help at home soon. But there's one big problem: There may not be enough people to fill the positions.

"It's a challenging job; it's physically challenging. One top of that, the pay is somewhat low; we're talking about an average of $23,000 a year. It's brushing down to poverty levels," Ted Hesson, an immigration reporter for Politico, told Newsy recently.

"Part of the reason is there are low barriers to entry; you don't necessarily need a certification. If you're willing to do it, you can get into it," Hesson said.

But Trump's campaign to cut both legal and illegal immigration could leave a lot of these positions unfilled. The president has touted one bill that would cut legal immigration in half over the next 10 years and would put a preference on immigrants with higher skills and education. That's the exact opposite of your average home health aide.

So the question becomes: "Could Americans do these jobs?" Could? Yes. Will they? It's not likely. We've already talked about the low pay, but there's also not great benefits and the next steps for a career aren't always very clear.

"Fewer people coming in illegal and legal immigrants not coming in the same numbers; it's hard to imagine who would fill these jobs in this sector, and you could be looking at real question about who would do this work. Maybe people would have to quit their jobs and stay home with their loved ones," Hesson said.

And that could have a negative effect on the economy. With people quitting their jobs to head home, the family income goes down and that impacts the family's overall output.