Rapper Wants His Satellites To Prove Earth's Shape, Once And For All 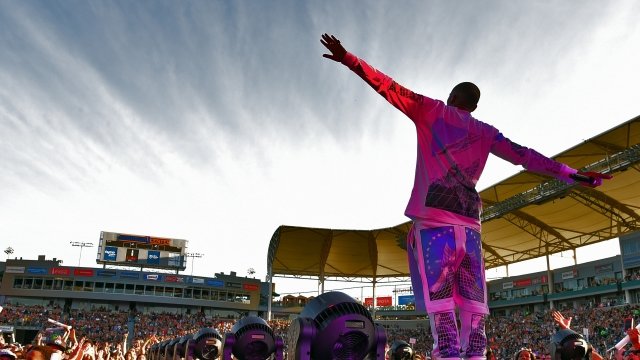 Skeptical of NASA's evidence, B.o.B said, "I would like to send one, if not multiple, satellites as far into space as I can ... to find the curve."

What do you do when you don't trust NASA's evidence that the Earth is round? If you're B.o.B, you set out on your own mission.

The rapper said, "I would like to send one, if not multiple, satellites as far into space as I can — or into orbit as I can — to find the curve."

He launched a GoFundMe campaign to raise $100 million for the satellites.

He initially asked for $200,000, but by Tuesday afternoon, the campaign's goal increased to the $100 million mark. No word yet if he's trolling us all.

At any rate, the question seems to have plagued B.o.B for some time.

Last year, he asked someone to prove to him our planet isn't flat. Many tried, including renowned astrophysicist Neil deGrasse Tyson.

But the thing is, B.o.B doesn't need a satellite or NASA's assurances to know the Earth is round.

Long ago, the ancient Greeks realized during lunar eclipses Earth's shadow is cast against the moon, and that shadow has a curve.

If you can't wait for an eclipse, you can fly across a large body of water and often see the earth's curve on the horizon.

If you got the job, you'd protect NASA's search for alien life — and make six figures.

Still cheaper than a plane ticket — drop a ball. Objects fall straight down because a round planet's center of mass is always the same, no matter where you are.

But gravity doesn't only work like that because Earth is round; the planet is round because of gravity.

Planets and other large bodies form when materials in space clump together. Eventually these pieces gather such a strong gravitational force that everything gets pulled toward the center, forming a sphere.