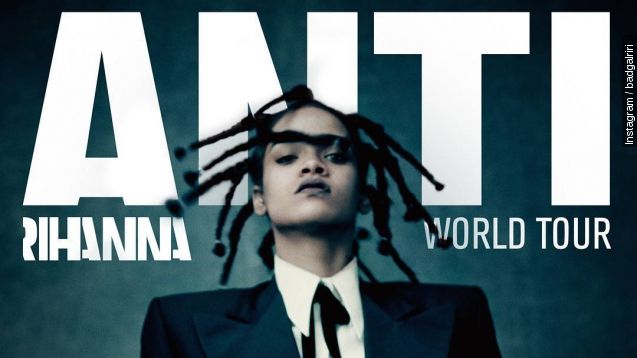 SMS
B**** Better Have My Album: Where Is Rihanna's 'Anti'?
By Cody LaGrow
By Cody LaGrow
December 29, 2015
Rihanna's highly anticipated eighth album has yet to drop, and one insider says he has an explanation.
SHOW TRANSCRIPT

It seems the much-anticipated release of Rihanna's new album, "Anti," has made fans flustered and dumbfounded, because she's been working on it for a while. Rumors about drop dates have rocked the Rihanna Navy, including rumors of a potential release on Christmas Day. Even Adele was on the brink of going bananas — and that was a month ago.

"There was some teases for Rihanna's new record. And I'm on the edge. Living life on the edge, waiting for it. In a good way. I'm the biggest RiRi fan," Adele shared on NBC.

Adele referenced these "ANTI diaRy" videos released by the eight-time Grammy winner, which made fans think Rihanna was dropping the bomb at any moment. But still, nothing.

RiRi also went on a mega-media blitz in early fall, gracing the covers of Vanity Fair and The New York Times Style Magazine — even promoting her eighth album's artwork in October. And despite the ramp-up, still, no new music.

Now, a songwriter for the album is shedding light on one reason he says this album rollout is longer than Rihanna's Met Gala dress.

So that leaves you and I living solely on Rihanna's early 2015 releases. But Ri, my American Oxygen tank is empty.

So please, sing me what you owe me. Don't act like you forgot. B***** better have my album.