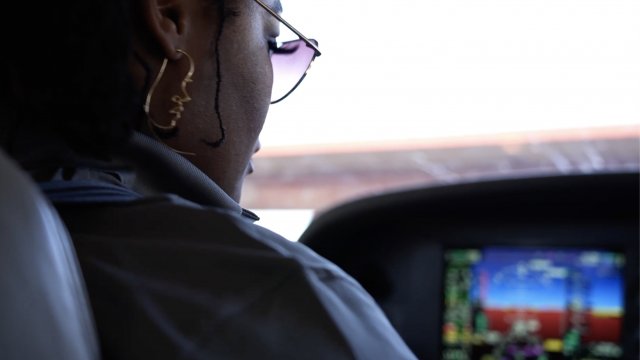 In the crisp, cold desert morning before many are out of bed, a flock of young aviators is already preparing for flight.

Ricki Foster is a flight attendant-turned-pilot-in-training. She's one in a new crop of people preparing for a critical new chapter in the airline industry.

The airline industry is set to have a massage shortage by the mid-2030s. The Bureau of Labor Statistics predicts more than 14,000 job openings for pilots every year in this decade.

For one of the world's most expensive industries,  it's a huge uphill climb.

"I didn't think it was possible at all," Foster said. "It was not on my radar for several reasons. One: Does anybody really know how to become a pilot?"

That question dogged aspiring pilots for years, especially minorities and women who lack representation and resources to get into the cockpit.

That's where United Airlines captain Curtis Brunjes comes in. He's helping lead a brand new flight school near Phoenix dedicated specifically to getting students from no flight experience at all to full-blown professional aviators with United Airlines.

"These people that are learning to fly here today will be getting to United cockpits in five years," Brunjes said. "We're ramping up to what we hope to be 300 students on campus in the short term and up to about 500 in the long term."

The financial hit the airlines took after 9-11 prompted mass furloughs and layoffs. The economic downturn followed and left the industry with a solid 10-year gap without meaningful pilot intake.

"Prior to a year ago, the most pilots we'd ever trained in a month was 100," Brunjes said. "We're currently training 265 pilots a month."

The sea of monitors and switches on an aircraft is incredibly complex, taking hundreds of hours to learn to use and eventually fly.

But a full-motion flight simulator, called Level D, is so realistic that pilots do all of their training for a particular plane type in a simulator just like it.

Their first time flying the real thing will have a planeload of passengers in the back.

At the moment, United doesn't have enough tools to train, but Marc Champion, the pilot in charge of running the training facility, says United is planning a "historical" amount of growth starting in 2023 and beyond.

Even with 550,000 square feet, 40 simulators and capacity to train 12,000 pilots a year, it's still not enough. Champion says they need "a lot more" of the massive, $15 million classrooms — the simulators.

It's a shift to fill the cockpits and change who is in them.

"Our cockpit right now is somewhere between 70 and 80% White male. As you can see in the class here, the class here reflects the demographic of our nation, right?" Curtis said. "It's somewhere in the range of 70% diverse — women and people of color."

For Foster, it's personal — not just for herself, but for the little Black girls who will someday look at her striding through the airport in uniform and know they, too, can become a pilot.

"Actually, I've never seen so many Black women in one space," Foster said. "My daughter — the point that I said I wanted to be a pilot, it's as good as done in her mind, like she didn't even think of barriers or anything else. She, in her mind, [said] 'mommy wants to be a pilot. She's going to be a pilot.' Can you imagine feeling that way about everything in your life? I want every child to have that."

That dream is now a few short years and a few hundred flying hours away.

"I'm happy for every new student that's going to walk through that door because there's nowhere else I'd rather be training," Foster said. "This is it."

"For those pilots that are contemplating starting, this is a career," Champion said. "I think there couldn't be a better time in the industry to do so."