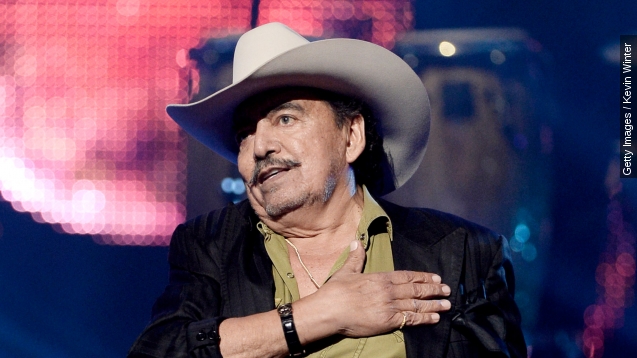 By Karen Rodriguez
July 14, 2015
Award-winning Mexican singer-songwriter Joan Sebastián has died at the age of 64 after a long fight with cancer.
SHOW TRANSCRIPT

Award-winning Mexican singer-songwriter Joan Sebastián has died at the age of 64 after a long fight with cancer.

Sebastián was diagnosed with bone cancer in 1999 and was battling his fourth relapse. In April, his son, Julián Figueroa, confirmed to “Hoy” that his father was back in the hospital trying new cancer treatments.

“Of course, we are always there by his side or sleeping there with him, taking care of him. Love and support,” said Julián Figueroa in an interview with “Hoy.”

The singer died on his family's ranch in Mexico.

Sebastián’s career skyrocketed at the age of 25, and he was known for combining traditional Northern Mexican music with romantic and sentimental lyrics. His songwriting touched millions, giving him the nickname “The People’s Poet.” (Video via Joan Sebastián, LLC / Joan Sebastián)

His music went on to win multiple Grammys in Latin America and the U.S.

He told Billboard he lived his songs. “My songs are a response to feelings, to what I’ve lived. … The important thing is that the songs be sincere, that they be truthful.”

He earned the nickname “El Rey Del Jaripeo” — which roughly translates to “The King of Rodeo” — because he performed on horseback often and loved the sport. (Video via YouTube / Buckskinridah)

Sebastián also appeared in films and in telenovelas. His most notable role was Tomás Santillana — a famous musician — in the mexican soap-opera “Tú y Yo,” a role that, according to the American Society of Composers, Authors and Publishers, made him “the highest-paid star in Mexican television at the time.” (Video via Televisa / ‘Tú y Yo’)

“I love life and I will wait for death with a smile.” (Video via Univision)