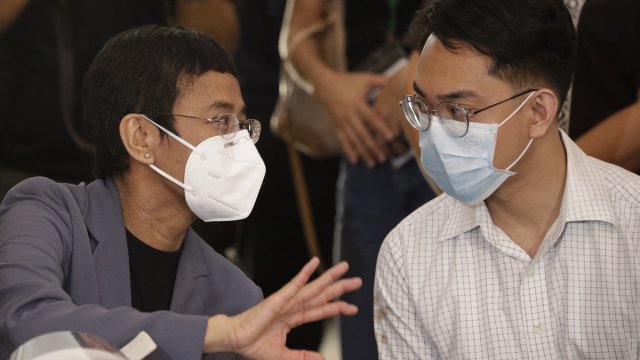 Filipino American journalist Maria Ressa has been found guilty of cyberlibel in the Philippines and could spend up to 6 years in prison. Ressa grew up in New Jersey and attended Princeton and founded the news site Rappler, which has been critical of Philippine President Rodrigo Duterte's brutal war on drugs. She was also honored as Time's 2018 Person of the Year for her reporting.

"Taken alone, I think the decision for me is devastating," she said.

"I appeal to you, the journalists in this room and Filipinos who are listening, to protect your rights. We are meant to be a cautionary tale. We are meant to make you free. So I appeal again. Don't be afraid. Because, if you don't use your rights you will lose them," she said.

Human rights groups and reporting organizations like the International Federation of Journalists have condemned the ruling, calling it an attack on the free press.

The country's foreign secretary said the Visiting Forces Agreement, which lets U.S. troops train in the Philippines, will be scrapped.

Joyce Barnathan, President, International Center for Journalists: "What you find are that there are authoritarian leaders, strong men, people who do politicians who do not like when journalists report the truth or hold them to account. And this is a worldwide trend, a very ominous trend for journalists everywhere."

Ressa along with another Rappler reporter were charged with violating a new libel law in an article linking a high-profile businessman to trafficking and drug smuggling. They were tried based on a law that was created after the article was published. The Philippines Department of Justice retroactively applied the law after Rappler fixed a typo and republished the article. Rapper said Ressa did not write nor edit the article.

Ressa also faces seven other charges including tax evasion. She will be defended by international human rights lawyer Amal Clooney. The ruling comes just six weeks after one of the country’s largest cable news channels ABS-CBN was kicked off the air by the Duterte administration. Duterte has been highly critical of Rappler saying it peddles fake news. He also has a history of attacking the media.

President Rodrigo Duterte: "Press freedom. You are the number one thief… You want my sentiments? F--- you."

Duterte's spokesman told the New York Times the media should "respect the decision" and that he has never filed a libel case against a journalist.

The gunman released the hostages after an hourslong standoff, according to The Associated Press.

Both of the free press advocates we spoke to say the ruling in a democracy like the Philippines has far reaching impacts.

Barnathan: "We hope that by giving this global attention and the attention that it deserves, we can put the brakes on what's happening here. Maria Ressa always says she is the canary in the coal mines for journalists all around the world. So what happens here will ripple throughout the world if they get away with it."