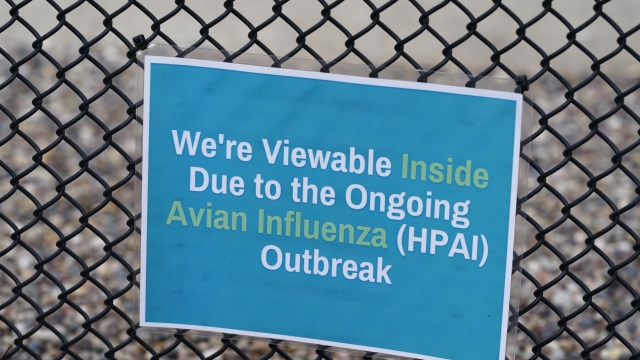 Bird flu, in the U.S. and abroad, is pushing poultry prices up ahead of Thanksgiving.

Humans aren't the only ones coming down sick ahead of the holiday season.

"Just like people get the flu, birds get the flu. Some strains are a lot worse than others. In this case, it's really bad. It kills the birds," said David Anderson, an economist at AgriLife.

Across the country, avian flu outbreaks are taking a toll on the turkey and chicken industry, leaving farmers scrambling as they try to protect their birds.

"We started off the year as normal at our normal time with 600 birds. They had not even left the rooting barn yet; the bird flu came into the area," said Cathy Cabalo, the owner of Cabalo's Orchard and Gardens. "When we're looking at 600 turkeys, that are bread and butter to the season, we didn't dare let them outside."

As of Nov. 1, 43 states had at least one confirmed infected flock according to the U.S. Department of Agriculture — with Iowa being one of the hardest hit states in recent weeks. Officials estimate that nearly 48 million birds in the U.S. have been affected so far.

Out of the 585 flocks confirmed to have cases of avian flu, 333 are backyard flocks – with the CDC advising folks raising their own birds to do so with caution. That means wearing protective equipment like goggles and masks especially when handling sick or dead birds.

The Department of Agriculture says the bird flu has turned up in commercial and backyard flocks in 29 states, affecting more than 33 million birds.

The avian flu is not just an American problem. In the U.K., poultry farmers have been ordered to keep birds indoors as the country has recorded its largest spread on record: more than 200 cases. In Japan, 40,000 chickens were ordered slaughtered following positive tests.

As case numbers rise, businesses are struggling to keep up with holiday demand.

"Between avian influenza and high feed costs, right there you have the recipe for higher prices. We see right now at the store, whether wholesale or retail prices," said Anderson.

Greg Schmidt is the manager of Tower Chicken Farm.

"My supplier lost over 100,000 birds just in the month of August," said Schmidt.

Add in inflation and shoppers are feeling the pinch in their wallet. According to Auburn University, turkey prices are 25% higher than they were this time last year — with turkey production estimated to decline 6.4% in 2022. The price of a 15-pound turkey is now nearly $21 compared to $15 last year.

And if you are looking for a big bird for your Thanksgiving table, industry experts warn that the sooner you purchase or order your holiday bird, the better off you'll be, adding that last-minute shoppers might find themselves out of "cluck."