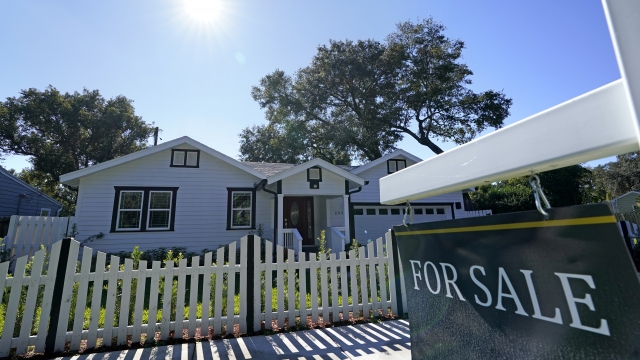 Mortgage buyer Freddie Mac reported Thursday that the average on the key 30-year rate fell to 6.61% from 7.08% last week.

The average long-term U.S. mortgage rate tumbled by nearly a half-point this week, but will likely remain a significant barrier for potential homebuyers as Federal Reserve officials have all but promised more rate hikes in the coming months.

Mortgage buyer Freddie Mac reported Thursday that the average on the key 30-year rate fell to 6.61% from 7.08% last week. A year ago the average rate was 3.1%.

How The Federal Reserve's Rate Hikes Affect Your Finances

Answers to some of the most common questions about the impact of the rate hike.

Two weeks ago, the Fed raised its short-term lending rate by another 0.75 percentage points, three times its usual margin, for a fourth time this year as part of its inflation-fighting strategy. Its key rate now stands in a range of 3.75% to 4%.

There had been some hope that the Fed would begin to dial the rate increases down as more evidence comes in that prices may have peaked. However, recent comments by Fed officials have knocked down that optimism.

James Bullard, who leads the Federal Reserve Bank of St. Louis, said Thursday that the Fed may have to raise its benchmark interest rate much higher than it has previously projected to get inflation under control.

The Fed’s next two-day rate policy meeting wraps up on Dec. 14.

The Labor Department reported last week that consumer inflation reached 7.7% in October from a year earlier, the smallest year-over-year rise since January. Excluding volatile food and energy prices, “core” inflation rose 6.3% in the past 12 months. On Wednesday, Labor reported that prices at the wholesale level fell for the fourth straight month.

Those figures were all lower than economists had expected, but it remains to be seen whether it’s enough to get the Fed to ease off the jumbo rate hikes.

A decade-long seller’s market is coming to an end as housing prices plummet. This chart shows how much the market is down in 60 cities.

Three weeks ago, the average long-term U.S. mortgage rate topped 7% for the first time in more than two decades, which combined with sky-high home prices, have crushed homebuyers’ purchasing power by adding hundreds of dollars to monthly mortgage payments.

Sales of existing homes have declined for eight straight months as borrowing costs have become too big of an obstacle for many Americans already paying more for food, gas and other necessities. On top of that, homeowners seeking to upgrade or change locations have held off listing their homes because they don’t want to jump into a higher rate on their next mortgage.

The sagging housing market has prompted real estate companies to dial back their financial outlooks and shrink their workforces. Online real estate broker Redfin is letting go of 862 employees and shutting down its instant-cash-offer subsidiary RedfinNow.

Redfin also laid off 470 employees in June, blaming slowing home sales. Through attrition and layoffs, Redfin has slashed more than a quarter of its workforce on the assumption that the housing downturn will last “at least through 2023,” it said in a regulatory filing.

Another online real estate broker, Compass, has laid off hundreds of workers this year.

While mortgage rates don’t necessarily mirror the Fed’s rate increases, they tend to track the yield on the 10-year Treasury note. The yield is influenced by a variety of factors, including investors’ expectations for future inflation and global demand for U.S. Treasurys.