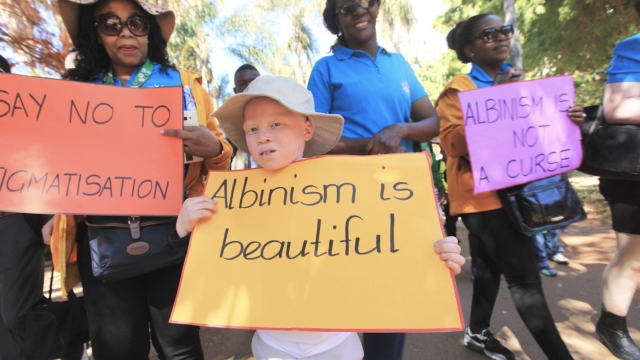 SMS
Authors, Actor Hope To Reduce Stigma Surrounding People With Albinism
By Amber Strong
By Amber Strong
March 2, 2022
An author recounts his experience living with albinism as a child in a children's book, and an actor is sharing his journey through his TV role.

James Morehead has been a pastor, a professor and now an author.

"I have lighter skin that is bright white," Morehead reads from a children's book. "As a child I would be teased, and of course  you know that that is not right."

There’s one more thing about him he’s no longer ashamed of: his albinism, a genetic condition that can affect eye, hair and skin pigmentation.

Morehead and his daughter Andrea Morehead, an award-winning journalist, hope to share that message of pride with children in a book titled "The Brightest Star," which recounts James Morehead's experience as a child — a journey he says wasn’t easy.

"I could not even tolerate hearing the word, I couldn't say it," he said. "It is like an African American hearing someone use the n-word. That's how negative the expression was in my life."

The everyday teases from children, and even adults, were compounded for Morehead, living at the intersection of being Black with albinism.

"I grew up too White to be Black and too Black to be White, and so I was segregated by both Blacks and Whites," he said.

His daughter says she also experienced the stares and questions.

"The kids at the bus stop were like, 'We didn't know your dad was White,' and so I didn't know how to explain that to them," Andrea Morehead said.

James Morehead says he found love and acceptance from his wife and children, but that experience of being Black with albinism is common.

Actor Marvin Jones III dealt with unanswered questions about why he was born with albinism.

"The melanin that you don't see is definitely ingrained in and grafted in my spirit and soul," Jones said. "I was very confused. I was very angry. I was very uncomfortable almost to say, to be honest, in my own skin a lot."

Jones says he found his voice and strength in his faith. While working in an industry criticized for its depiction of people with albinism — often portrayed as evil or a joke — and while his character on The CW's "Black Lightning" was an antagonist, he says the show worked to portray his humanity.

"There was so many things that I wanted to do," Jones said. "I want to show him driving, you know, because we drive, and you know, you never see a person with albinism driving."

"A lot of times it's unintended as far as the ultimate impact, but oftentimes, there's just a little thought being put into how this impacts folks who who have albinism," said Donté Mickens, board chair of the National Organization for Albinism and Hypopigmentation.

In certain parts of the world, positive representation can be a matter of life or death.

"There are some areas of eastern Africa where witch doctors are prevalent, and then they unfortunately spew lots of misinformation with regards to albinism, having some sort of mystical power or something like that," Mickens said.

In the past 20 years, hundreds of people with albinism have been dismembered or murdered in parts of Tanzania, Mozambique and Malawi, with Amnesty International calling it an ongoing threat.

However, organizations in some parts of eastern and southeast Africa have fought against the misinformation, holding pageants for people with the condition.

Beauty influencers like Jennifer Rhodes and authors like Destiny O. Birdsong have also worked to push back against the stigma.

Jones, who wrote the foreword for "The Brightest Star," says he hopes this book, the "Black Lightning" role and his real-life story open the door for more people with albinism.

The Moreheads agree, saying representation, education and love for all mankind can go a long way.

"We love you," James Morehead said. "Even though we've not seen you, may never see you, but you are a creation of an almighty God, and therefore we love you."