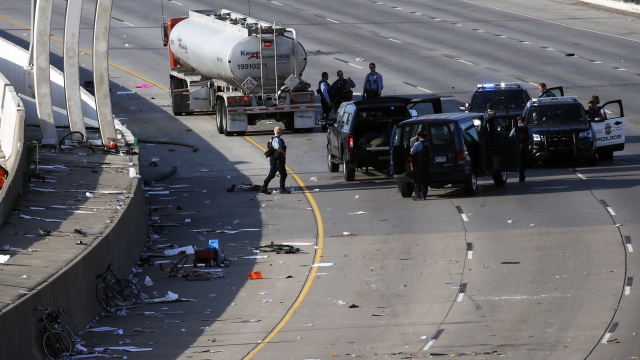 SMS
Authorities Say Truck Driver Did Not Intend To Drive Into Protesters
By Ahmed Jawadi
By Ahmed Jawadi
June 2, 2020
Minnesota authorities said evidence so far seems to indicate ​that the driver wasn't trying to hit people or target the protest.
SHOW TRANSCRIPT

Minnesota authorities said Monday the man who drove a tanker truck through a crowd of protesters on a highway in Minneapolis likely did so by accident.

"We do have some information that he saw the crowd and initially, what it looks like, he panicked and he just kept barreling forward," Minnesota Public Safety Commissioner John Harrington said. "We don't have any information that makes this seem like this was an intentional act."

Harrington said the truck had already entered the interstate before roadblocks were put in place to block off access to the highway. He also said although the driver was speeding and "knew the protest was going on," evidence so far indicates he wasn't trying to hit people or target the protest.

The driver was taken into police custody on suspicion of assault shortly after Sunday's incident, but has since been released from jail. Prosecutors said in a statement the case "has been deferred pending further investigation."