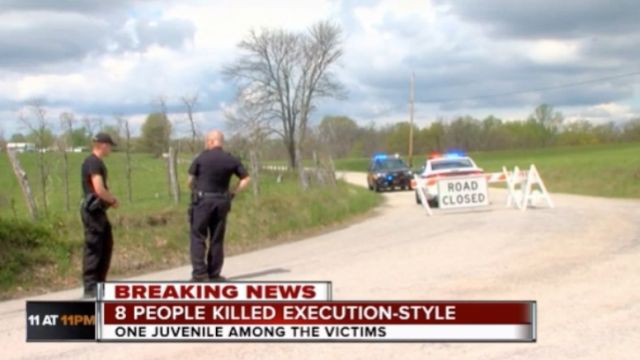 SMS
Authorities Say Ohio Family Massacre Was A 'Pre-Planned Execution'
By Katie Link
By Katie Link
April 24, 2016
Authorities say the victims, all members of the Rhoden family, were shot in the head, and many of them were in their beds.
SHOW TRANSCRIPT

Authorities are now calling the murder of eight family members in rural Ohio a "pre-planned execution."

Newsy's partners at WCPO report that police still don't know how many people are involved in the killing of seven adults and one teenager across four homes in Pike County, Ohio.

The victims have all been identified as members of the Rhoden family. Authorities say the victims were shot in the head, many of them in their beds. Three young children were found uninjured at the different crime scenes.

Recordings of 911 calls reveal that relatives discovered the victims Friday.

"I think my brother-in-law is dead," a caller says.

"Alright, we've got deputies on the way, OK?" a dispatcher says.

"Thank you," the caller says.

"You're welcome," the dispatcher replies.

As authorities investigated the crime scenes, they discovered marijuana "grow operations" at three of the four homes.

A local businessman is offering a $25,000 reward for information leading to arrests. Investigators say they've conducted more than 50 interviews so far and that a team of nearly 40 is scouring the woods for more evidence into the murders.

"It was a sophisticated operation, and those who carried it out were trying to do everything they could do to hinder the investigation and their prosecution," Ohio Attorney General Mike DeWine said.

While there is no perceived threat to the community at large, authorities encouraged surviving relatives to arm themselves.