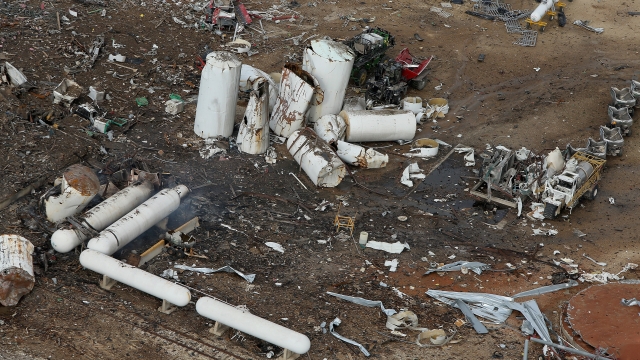 SMS
Authorities Say Fertilizer Plant Explosion Was A 'Criminal Act'
By Eugene Daniels
By Eugene Daniels
May 11, 2016
The ATF says after 400 interviews and scientific testing, "All viable accidental and natural fire scenarios were hypothesized, tested and eliminated."
SHOW TRANSCRIPT

Authorities say a Texas fertilizer plant explosion that killed 15 people and injured hundreds was started by an intentional fire and was "a criminal act."

"The only hypothesis that could not be eliminated and was confirmed by extensive testing at the ATF fire research laboratory is incendiary," Special Agent Robert Elder said in a press conference Wednesday.

So far, no arrests have been made or possible motives given, but the Bureau of Alcohol, Tobacco, Firearms and Explosives says it's "on the right track." The ATF says after 400 interviews and scientific testing, "All viable accidental and natural fire scenarios were hypothesized, tested and eliminated."

The explosion happened three years ago at West Fertilizer Co., south of Dallas, about 20 minutes after the fire first broke out. The explosion caused a magnitude-2.1 earthquake and destroyed 500 homes.

A previous investigation found the explosion was preventable and blamed the company for its "failure ... to take necessary steps to avert a preventable fire" as well as federal, state and local agencies for failing to "identify a serious hazard and correct it." The fertilizer plant had 270 tons of explosive material inside.

The explosion caused about $100 million in property damage and a total insurance-related losses were around $230 million.

The ATF has announced a $50,000 reward for information leading to the arrest of whomever is responsible.

This video includes images from Getty Images and clips from KTVT, CNN, ABC, NBC and CBS.