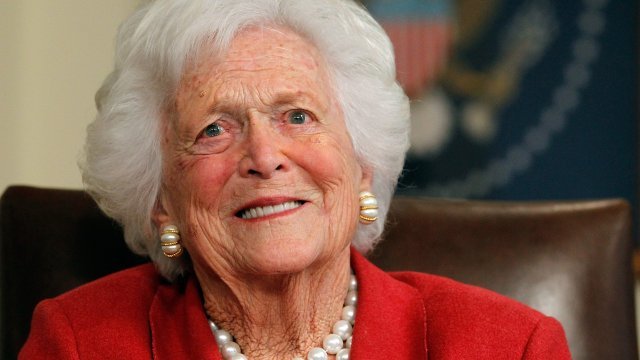 When former first lady Barbara Bush died Tuesday at the age of 92, she left a legacy much greater than her appearance suggested. That's according to Susan Page, USA Today's Washington, D.C., bureau chief, who's currently writing a book on Bush.

Page said, "I think some people had a misperception about her because of how she looked. She looked pretty matronly, white hair, she always wore those strands of fake pearls, and they thought of her as a very traditional first lady, like a Bess Truman or a Mamie Eisenhower. And in fact, her appearance belied the influence she had in both the White House of her husband and of her son."

Bush made an impression as first lady — even though her husband President George H.W. Bush was only in office for one term.

In her formal role, she took on literacy but didn't confine herself to that one cause. Bush refrained from expressing her own political views while her husband was president but often got her point across in other ways.

"There were some other issues that were important to her that were controversial that I think she handled in a slightly different way," Page said. "And one would be, for instance, the AIDS crisis. The Reagan White House kept pretty silent about AIDS as that epidemic was raging across America; a lot of people were very frightened about people who had AIDS. She did a series of things without making a big cause of it that were intended to send a message."

Had social media been around then, the images from Bush's visit to an AIDS hospice in Washington, D.C., would have likely gone viral. It's something people across the aisle remember fondly. In fact, Page says her passing is a reminder of a time when our nation wasn't so divided.

"It's not that there wasn't hard politics — there was — and the campaign between George H.W. Bush and Bill Clinton was a very hard fought campaign," Page said. "But it was not as poisoned as it is now. It wasn't as polarized. There were people that had friendships across party lines, here in Washington ... that's less the case now."