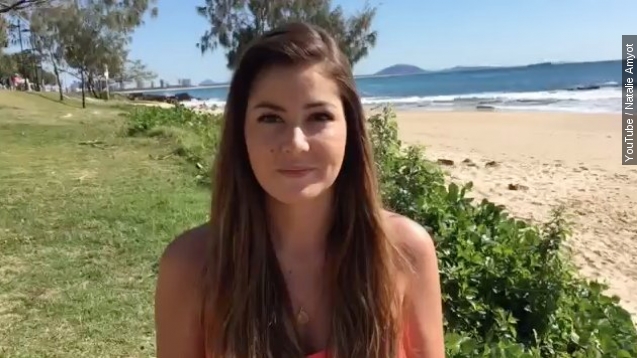 Did you hear about the French tourist's desperate search for the Australian father of her unborn child? That sentence alone sounds like the most convoluted romance novel ever.

"We had a beautiful night. And on the next morning I flew home to Paris and I lost my phone with his number in it. So I have no way to contact him. And six weeks later, I found out that I am pregnant," the woman in the video said.  (Video via YouTube / Natalie Amyot)

It gained over a million views, but some were suspicious.

Like with how the woman's social media footprint had only begun a few days ago.

Then came the plot holes, like how the Australian man's name was never mentioned in the video.

"I found him," the actress said.

"But there's a little twist. This has been a viral video for Holiday Mooloolaba," the owner of the travel company said. (Video via YouTube / Natalie Amyot)

Yep, it was all just a hoax to get you to visit a city in Australia, and the man in charge of it, Andy Sellar, says he's going to be doing "many, many more videos like this."

The Huffington Post reached out to the owner of the travel company, who said, "The benefits [for] the cafe owners and hoteliers will far outstrip any negatives the campaign will generate."

And the negativity has been swift — the video isn't doing great, ratings-wise, and the YouTube comments are even worse.

Maybe he's right and no publicity is bad publicity. Or maybe people won't remember Mooloolaba's hotels or cafes, they will just remember being duped by a fake pregnancy.