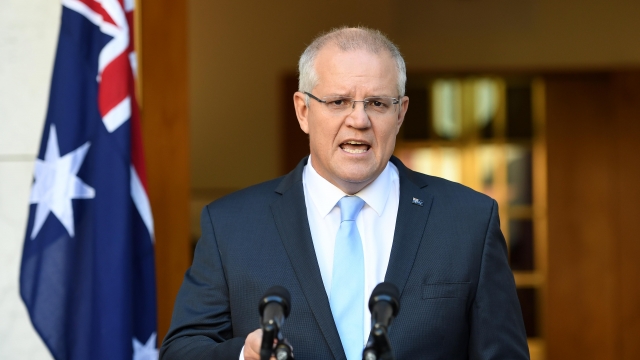 SMS
Australian PM Admits Mistakes In Handling Of Bushfire Crisis
By Alec Larson
By Alec Larson
January 12, 2020
Since late July, the Australian bushfires have been responsible for 27 deaths and the destruction of thousands of homes nationwide.
SHOW TRANSCRIPT

Following a wave of public criticism, Australia's Prime Minister Scott Morrison has admitted that there were things he "could have handled much better" in the ongoing bushfire crisis.

In an interview on Friday, Morrison expressed regret over his interactions with communities decimated by the fires, adding that the fires had made the government "think a little harder" about how to provide comfort to the victims.

Just days before Morrison's interview, thousands of activists marched in several major cities across Australia, calling for the government to do more to stop the fires and take greater action on the climate crisis. The organizer of the protest, Uni Students for Climate Justice, said the group was "outraged about our government's criminal negligence about the bushfire crisis."

Since the fire season began in late July, Australia has been decimated by the worst wildfires it has seen in decades. So far, 27 people have died nationwide and thousands of homes have been destroyed with no apparent end in sight for the fires.

Moving forward, Morrison said that he will propose a national inquiry into the government's response to the bushfires.