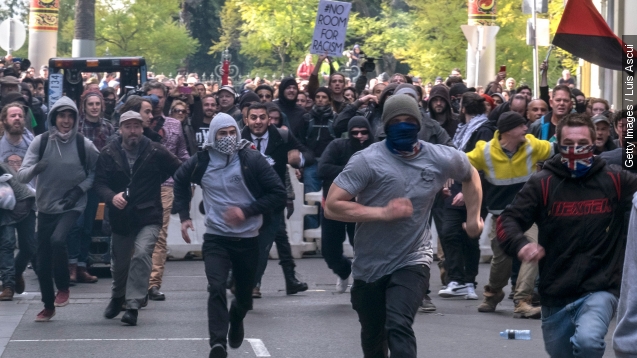 SMS
Australian Anti-Islam, Anti-Racism Protests Get Violent
By Kate Grumke
By Kate Grumke
July 18, 2015
One protest group is anti-Islam, while the other is anti-racism. Police in Melbourne stepped in to try to calm the crowds.
SHOW TRANSCRIPT

In response, 450 police were sent to calm the crowds.

They sprayed the protesters with pepper spray.

"The [police] were at significant threat of having their lines over run and it was a tool we had to use at the time," said Victoria Police Assistant Commissioner Stephen Leane.

Following a terror attack in Sydney, similar rival protests have broken out across Australia.

A man claiming allegiance to ISIS held a cafe hostage in December. He and two hostages died.

Some have criticized conservative politicians for fueling the anti-Islam sentiment with comments like this one.

"I have often heard Western leaders describe Islam as a religion of peace. I wish more Muslim leaders would say that more often and mean it," said Australian Prime Minister Tony Abbott.

One Australian member of parliament plans to speak at a Reclaim Australia protest Sunday.

Politicians have asked Australia's prime minister to stop the MP from speaking.

There are more protests planned for the weekend.