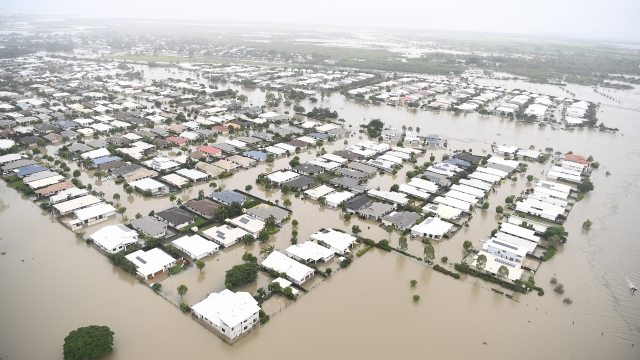 People in northeast Australia are bracing for more rain this week as they try to recover from what's already been called "once-in-a-century" flooding.

Over the weekend, more than 1,000 residents in the hard-hit city of Townsville in Queensland state were forced to evacuate their homes because of the rising flood waters.

And things were made worse Sunday night when city authorities opened the Ross River Dam, which had swollen to more than double its capacity from 3.8 feet of rain that had fallen in the area over seven days.

Relieving the dam's pressure reportedly caused it to release more than 70,000 cubic feet of water per second downriver.

Emergency crews are using boats and helicopters to rescue stranded residents, all the while trying to stay far away from the snakes and crocodiles that have been spotted roaming the streets.

But meteorologists warn another 4 inches of rain is in the forecast Monday for Townsville, followed by as much as 3 more inches on Tuesday. Officials predict as many as 20,000 homes could be at risk as the downpours continue.