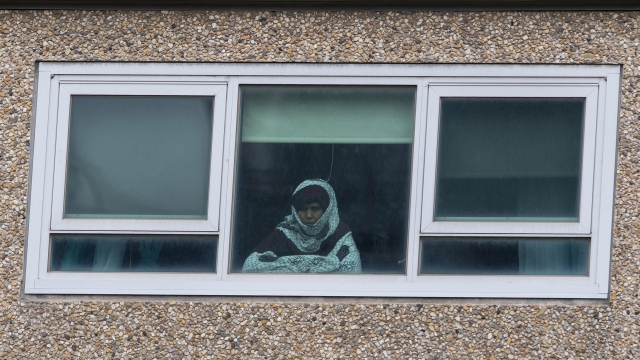 With a resurgent coronavirus, Victoria leaders are locking down Melbourne, while the U.S. remains open even amid much larger spikes.

At a public housing complex in Melbourne, Australia, police officers block off access roads, clashing with people resisting the total lockdown at the buildings.

"You're hurting her!" someone yells as officers pin one woman to the ground.

The anger comes after the government in Victoria state gave residents at the complex just a one-hour warning they'd be keeping everyone inside from leaving until they could test every resident for coronavirus.

The buildings have become a hotspot for the virus in recent days.

During the lockdown, crews are bringing bags of essential goods to the residents. The premier in Victoria, Daniel Andrews, announced residents won't have to pay rent for two weeks and will get so-called "hardship payments."

As cases rise in Melbourne, a softer lockdown is extending to the whole city again. Residents will only be allowed to leave their homes for essential trips like work or school, to get or give health care, or to get exercise.

"There is simply no alternative other than thousands and thousands of cases," Andrews told reporters.

Hundreds of scientists say the coronavirus can spread by even the tiniest droplets — and they're urging public health bodies to address that.

The state reported a rise of nearly 200 cases Monday, a huge number for a state that has seen just over 2,800 cases since the start of the pandemic. Victoria has recorded 22 deaths as a result of COVID-19.

But the swift and sweeping lockdown measures are a contrast to the U.S., where the spread of the coronavirus is out of control and comprises millions of cases.

"I do think that the international community has seen how quickly this can get out of control," said Divya Siddarth, a research fellow on a Harvard team regularly publishing recommendations for mitigating the pandemic. "Some of those countries had experience with other pandemics, right, like MERS and SARS," she said. "I think Australia has definitely taken those lessons into account."

By contrast, in Colorado, a state similar in size and population to Victoria, restaurants are able to serve customers on-site at limited capacity, and the health department recently announced pre-season sporting events could resume.

In Australia, the border between Victoria and the neighboring state of New South Wales, home to Sydney, is closed. Officials worry community spread in Victoria, a relatively new development, will worsen the outbreak nationwide.

The Republican National Convention will be held in Jacksonville, Florida, Aug. 24-27.

"It's a new part of the pandemic and, as such, it requires a new type of response," New South Wales Premier Gladys Berejiklian said Monday.

"One of the things that we recommended in our paper called local targets is this kind of internal restriction, which we will need to do because the U.S. is not at the same place across the board in terms of where cases are at," Siddarth said. But the confines of our national norms have shifted. Siddarth argues our comfort zone needs to shift, too.

"This idea of internally restricting borders, it's not who we, normally, are as a country," she said. "[But] that kind of internal structure is going to be important, and I think that's one big piece of how Australia is trying to deal with this problem."

As a country, Australia still has fewer than 9,000 cases of the coronavirus, a far cry from the nearly 3 million in the United States, a place that has struggled to mitigate spread and entirely failed to contain it.

"We can suppress this," Siddarth said. "There's no mitigating the harm of not doing anything. We simply have to suppress this disease."

In Melbourne, leaders are aggressively trying to keep the coronavirus from getting worse, even if it means locking down a public housing complex an hour after announcing the move.

The city-wide lockdown is set to last at least six weeks.