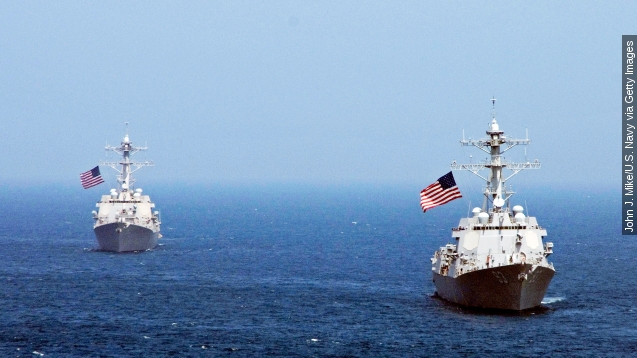 Australia is backing up the U.S.'s play Tuesday in which it sent a warship into waters China considers its property.

Maritime law says a country's borders extend 12 nautical miles beyond its land. But the manmade islands China is claiming as its own have many countries arguing against China's self-declared ownership of the water. (Video via U.S. Navy)

By sailing through that zone, the U.S. denied China's ownership claims.

"If we don't do this — we're the only nation who has the capability and the will to do this — then the Chinese will close off the South China Sea," an expert in Asian affairs told Fox News.

Like the U.S., Australia's defense minister believes all countries have the right to navigate the waters freely.

However, Australia will not be joining the U.S.'s "naval exercise" by sending its own ships through that zone. (Video via Royal Australian Navy)

Australia is in an awkward position, considering the U.S. and China are two of its biggest trade partners.

Angering China would be unwise, especially since Australia often exports more to the country than it imports from it. (Video via CCTV)

But as Australia's defense minister noted, roughly 60 percent of all the country's exports go through the South China Sea, and keeping freedom of navigation is vital.

The U.S. appears to have an ally in the dispute for now, but there could be a limit to the actions Australia is willing to take. (Video via Royal Australian Navy)