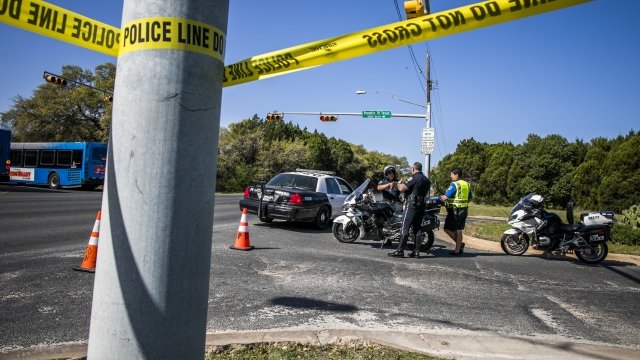 SMS
Austin Police: Incendiary Device, Not A Bomb, Went Off Tuesday Night
By Jake Jones
By Jake Jones
March 20, 2018
One person was injured in an incident at a Goodwill store, but police don't believe it's related to a string of bombings in the city.
SHOW TRANSCRIPT

Authorities in Austin, Texas, say an incident that injured at least one person at a Goodwill store was the result of an incendiary device, not a bomb.

Officials responded to a reported explosion at the store on Tuesday night. They say right now they have "no reason to believe" the incident is related to several bombs, made to look like mail, that have detonated in or near the city this month.

The first three bombs were left outside homes and the fourth was detonated via tripwire. A fifth detonated inside a FedEx facility early Tuesday. Two people have died and four have been seriously injured.

A sixth bomb found at a FedEx facility early Tuesday is now in police possession. Officials hope that discovery could provide critical information about who is making the bombs.