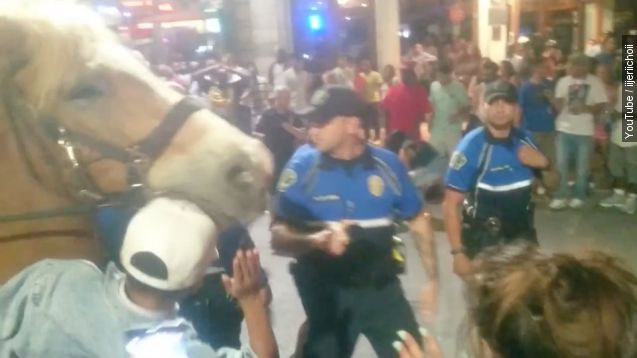 Austin police are investigating an overnight incident involving officers and citizens after one individual was pepper-sprayed and others were reportedly kicked by police horses. (Video via YouTube / iijeriichoii)

The video appears to show officers controlling a crowd while making an arrest. The video description says, "All we saw was someone get tackled by a single police officer (he looked a bit young to be drinking) and then this. Make your own judgement."

At one point in the video, you can see a mounted officer grabbing a man's phone while another officer pepper-sprays the man.

"Austin police are already well aware of the video when we called them in the last couple of hours. They had a statement ready to go. They tell us they're conducting a review," KXAN reports.

The man who uploaded the video also tweeted multiple times about the situation on his personal account, saying, "Police pepper sprayed a guy next to me, got it all on film. Police horses kicking Trevor and Brennon. ... That is ABSURD. I've never been so upset at police. It was straight out of a film, 5 horses kicking and smashing a person's phone."

Austin is currently dealing with bigger-than-normal crowds as extreme-sports competition ESPN's X Games is in town. It's the second year in a row Austin's held the event, and police prepared by closing roads.

Currently, Austin police are not equipped with body cameras, but in an April report from KVUE, the department said it expects to have them in one to two years.