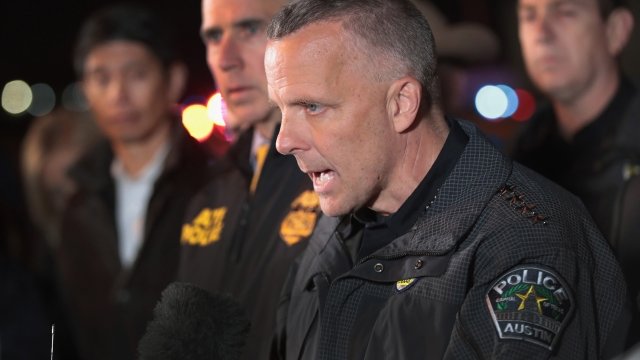 The interim police chief said he originally didn't use the term because he wanted to be careful for legal reasons.

The interim police chief in Austin, Texas, called the man suspected to be behind a recent string of bombings around the city a "domestic terrorist."

Interim Police Chief Brian Manley made that distinction on Thursday, saying he was previously focused on catching the bomber and also wanted to be careful with what terminology he used ahead of a likely court case.

The 23-year-old suspect blew himself up rather than surrender to law enforcement. He was believed to be behind five homemade bombs disguised as mail packages that went off in and around Austin, killing two people. A sixth bomb was discovered before it detonated.

The police department was initially criticized for not labeling the bombings as terrorism. Additionally, the suspect was described as a "challenged young man," leading some to argue he was given the benefit of the doubt because he was white.

Domestic terrorism is defined under federal law as "acts dangerous to human life ... intended to intimidate or coerce a civilian population; to influence the policy of a government by intimidation or coercion; or to affect the conduct of a government by mass destruction, assassination, or kidnapping."

In what seemed to be a confession recorded on the suspect's phone, police said he made no references to hate or terrorism.