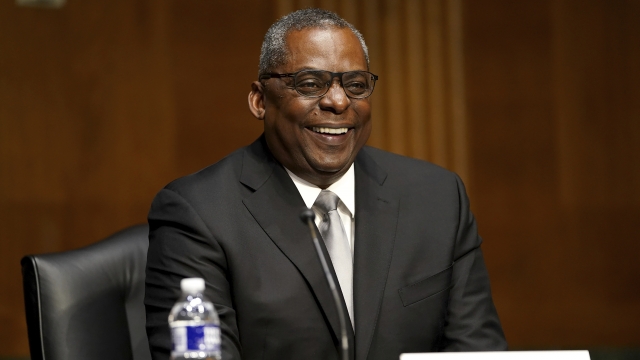 SMS
Gen. Lloyd Austin A Step Away From Being First Black Pentagon Chief
By Terace Garnier
By Terace Garnier
January 21, 2021
The relationship between the retired general and the president goes back years to when Austin ran U.S. Central Command.
SHOW TRANSCRIPT

Retired Gen. Lloyd Austin. is a step closer to Senate confirmation and becoming the first African American to run the Department of Defense.

Both the House and Senate gave the go-ahead on a waiver for Austin to take the job.

Under a law designed to keep the military under civilian control, he needs to be out of out the service for seven years to lead the Pentagon.

But Austin retired from the Army in 2016.

All signs point to Austin being installed by the end of week, a win for the new president as he pushes to fulfill his long list of promises.

“Joe Biden is absolutely committed to ensuring that we remain the strongest military power on the face of the Earth. He believes that we must have the best trained, be best equipped and most capable fighting force in the world. And ... he believes that the Department of Defense must be led by someone who not only knows the issues of war and peace, but also knows the heart and soul that women and men who bravely wear the uniform. That's why he selected Lloyd Austin to serve as secretary of defense," former Defense Secretary Leon Panetta said.

The relationship between the retired four-star general and the president goes back years to when Austin ran U.S. Central Command. Biden’s team believes the 67-year-old’s experience will help him hit the ground running on topics such as Iraq and Afghanistan.

“I think this conflict needs to end. ... We need to see an agreement reached in accordance with what the president-elect wants to see. I think we want to see in Afghanistan that doesn't present a threat to America. So focusing on some counterterrorism issues, I think, in the future would be helpful,” Austin said.

Biden has also promised to reverse many decisions made by the Trump administration, including restoring talks with the Palestinians and with Iran, writing in a op-ed: “I will offer Tehran a credible path back to diplomacy. If Iran returns to strict compliance with the nuclear deal, the United States would rejoin the agreement as a starting point for follow-on negotiations.”

Another topic the four star General and the President agree on.

Austin’s nomination now heads to the full Senate for a vote.