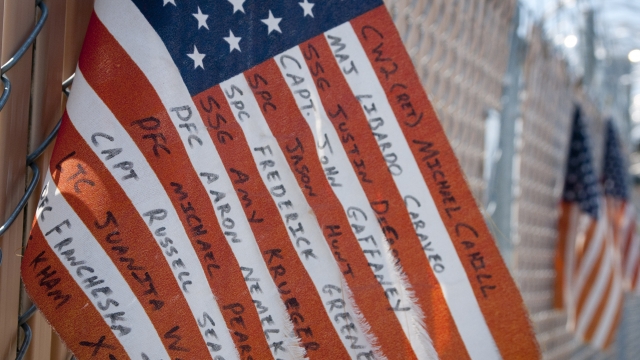 SMS
Attorneys To Argue Fort Hood Shooter Should Be Spared Death Penalty
By Terace Garnier
By Terace Garnier
October 14, 2020
Man on death row for 11 years for the worst massacre on a military base in U.S. history didn't get a fair trial, his lawyers say.
SHOW TRANSCRIPT

An attorney for the man convicted of the worst mass shooting on a military installation in U.S. history is set to argue his client’s death penalty should be changed to life without parole.

Former Army psychiatrist Nidal Hasan has been on death row for more than a decade after killing 13 people and injuring 32 others during a shooting rampage at Fort Hood, Texas in 2009.

Dorothy Carskadon is one of those survivors…...

“He took about, about a year of my life, 10 minutes for the shooting, and then another year for really recuperating. And do I have residuals from that? Sure.But I was able to kind of look back and go, I'm one of the blessed people. I don't let my history define me. I define my history,” Dorothy Carskadon said.

...she says she died 2 times in the ER after being shot in her head, hip, leg and stomach on November 5th.

“It's unfortunate that he gave up the gift that he was given. I hope he enjoys the consequences of his choices. Because we all have to live with consequences of our choices,” Carskadon told Newsy.

Hasan is paralyzed from the chest down after being shot by military police.

“To my dying day, I will say Nidal Hasan did not get a fair trial. I hope he gets a full, full review by the appellate court,” John Galligan said.

In 2013, Hasan, who was representing himself during his court martial, began his opening statements with "the evidence will clearly show that i am the shooter." Since that time he has not shown any remorse for his actions, according to his attorney, John Galligan, who told Newsy his client thought he was saving Muslims from U.S. soldiers getting ready to deploy to the Middle East.

Military jurors convicted him of 13 counts of premeditated murder and 32 counts of attempted murder in august 2013.

“This is a case where in the end, I think if the defense is looking for a win, it's not to get a new trial, but it would be to get at least a at the death penalty, so to sign and the case possibly revert to being one of life without possibility of parole," Galligan said.

Terace has been been following this story and joins me now. Terace, will Hasan appear in court and what’s his lawyer preparing to argue?

Why has he been on death row for so long? Is this normal?

As Galligan, his lawyer, explained to me, the process for death row cases is extremely long…and can take decades…. because legally the military has to go  through the entire appeals process…. Lauren?