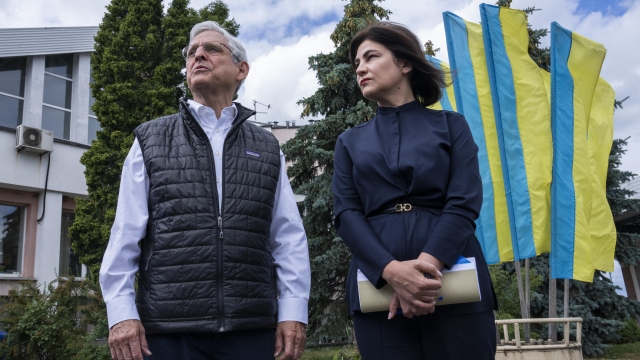 The U.S. Attorney General Merrick Garland made an unannounced trip to Ukraine on Tuesday to meet with Ukraine's Prosecutor General, Iryna Venediktova.

Garland told reporters that he was there to show unwavering support to Ukraine and to make sure those committing war crimes are held accountable.

"The United States is sending an unmistakeable message: there is no place to hide. We and our partners will pursue every avenue available to make sure that those who are responsible for these atrocities are held accountable."

Venediktova thanked the attorney general for the United States' continued support and cooperation.

"We all understand that we have a huge enemy and we should do all our best to fight (them)" she said.

Garland also tapped Eli Rosenbaum — a 36-year Justice Department veteran who headed efforts to identify and deport Nazi war criminals — as counselor for war crimes accountability. He will coordinate efforts to hold accountable those responsible for war crimes and other atrocities in Ukraine.

Ukrainian President Volodymyr Zelenskyy said the attacks in the Kharkiv region were especially "cruel and cynical" because they brought no clear benefit to the Russian forces. "The Russian army is deaf to any rationality. It simply destroys, simply kills, and in this way it shows its command that it is not really standing in place," he said in his video address.