Attacking The Press Is An Old But Useful Campaign Tactic 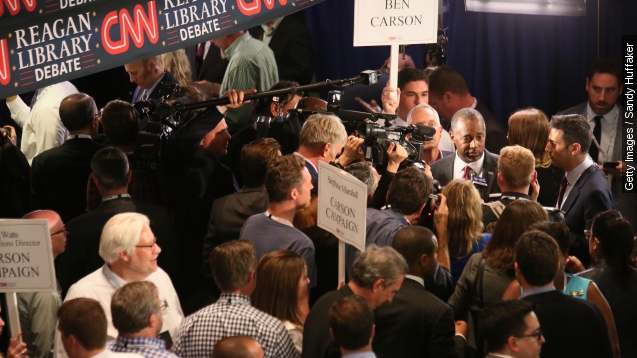 Attacking the press, sometimes literally, is an old tactic for politicians. (Video via CBS)

"They distort the system, as it was supposed to work," Ben Carson said at the National Press Club. (Video via C-SPAN)

Especially presidential candidates from both parties, who've been doing it liberally during this campaign cycle.

But different candidates use that tactic for different ends.

Ben Carson, the latest to target the press, says the media is overly partisan.

"A lot of the people in America are onto them, and understand what they're trying to do, and that's one of the reasons we're doing well, and it seems like the more they attack me, the better they do," Carson said.

In doing so, he crafts a narrative of himself as an underdog and solidifies his image as an outsider. Fellow outsider Donald Trump has done the same thing, but a little more bluntly. (Video via Carson America, CNN, Donald Trump)

"This is an old page from the political playbook: Attack the press and you're going to get a certain segment of the population that really likes that," Dan Rather told MSNBC's Rachel Maddow.

On the other side of the aisle, Bernie Sanders has similarly positioned himself as an outsider, but his attacks are more nuanced.

"I'm sorry, I am not going to get into the media game of attacking, making personal attacks against Hillary Clinton. I don't think that's what the American people want," Sanders told Andrea Mitchell.

As Jack Shafer writes for Politico, "He calls into question not only the product but also the capitalist structure upon which Big Media subsists."

Sanders told Bill Moyers, "The tendency of corporate America is not to discuss at length the real issues that impact ordinary people."

But there's always the strategy of avoiding the press altogether, like Hillary Clinton's campaign has done. (Video via ABC)

With only a hint of mockery.