Attack In Nice: Suspect Had Help From Accomplices, Planned Ahead 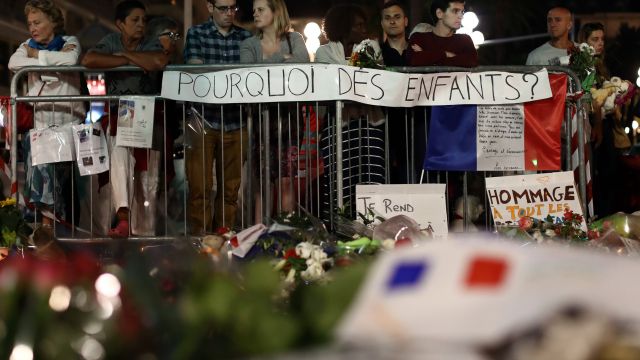 SMS
Attack In Nice: Suspect Had Help From Accomplices, Planned Ahead
By Lindsay Gloor
By Lindsay Gloor
July 21, 2016
French officials investigating the terrorist attack in Nice, France, announced it was premeditated and the attacker had help from accomplices.
SHOW TRANSCRIPT

One week after a terrorist drove a truck through Bastille Day fireworks onlookers in Nice, France, French officials now say the attacker had been preparing for months.

"This was a premeditated act by Mr. Mohamed Lahouaiej-Bouhlel. ... He enjoyed the support and the complicity of several people in the preparation and perpetration of this criminal act," Paris prosecutor François Molins said in a press conference Thursday.

The accomplices include French and Tunisian citizens and an Albanian couple, who were discovered using Bouhlel's cell phone and computer records. The five are now in custody and face preliminary terrorism charges for their alleged roles in the attack.

These records also revealed photos of last year's Bastille Day fireworks in Nice and a crowd of onlookers from another fireworks display several days later. These images and several others helped investigators determine the attack was planned.

"These investigating magistrates will continue interrogating the various people involved in the commission of these terrorist acts of the 14th of July that led to the death of 84 people," Molins said.

This video includes clips from France 24 and BBC and images from Getty Images.