Atlanta Gets Ready To Move A 6-Ton Civil War Painting 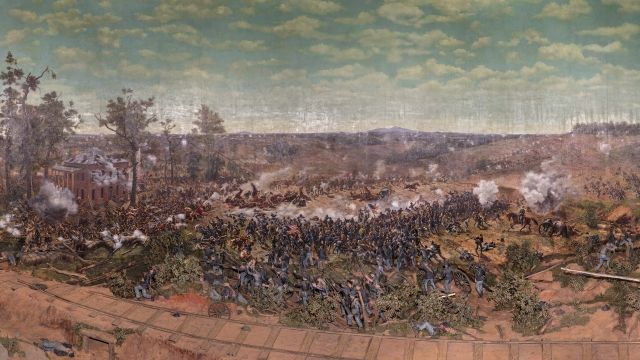 This is no ordinary oil painting, and getting it ready for the big move hasn't been easy.

The city of Atlanta is moving this Civil War-era oil painting to a new location.

That might not sound out of the ordinary, but this is no ordinary oil painting.

Weighing in at approximately 6 tons and measuring a whopping 15,000 square feet, "The Battle of Atlanta" cyclorama is one of the biggest paintings in the U.S.

It's been in a Civil War museum in the city since 1921. Now, workers are taking the giant panorama to the Atlanta History Center, where it will be restored and displayed for the next 75 years.

Authorities found the two paintings during an investigation into a group linked to the Italian mafia.

"The Battle of Atlanta" is only one of two 19th-century cycloramas on display in the nation. The other is at Gettysburg National Military Park in Pennsylvania.

Believe it or not, these giant paintings used to be a pretty lucrative business. Before movies were a leading form of entertainment, cycloramas offered audiences a realistic, 360-degree view of battles and other historic events.

It's expected to take two days to move "The Battle of Atlanta." Once that's done, the painting will undergo extensive restoration before its formal reopening, scheduled for next year.