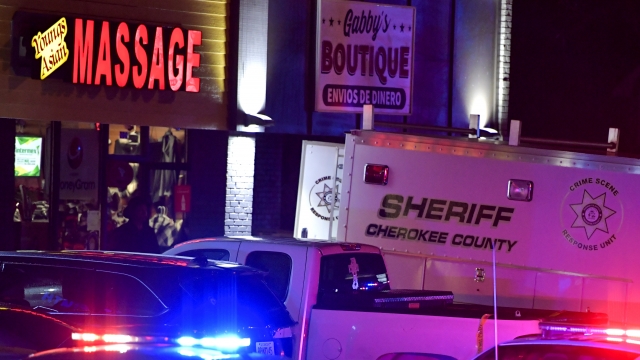 SMS
Atlanta Attacks Spotlight Violence Against AAPI Women
By Cat Sandoval
By Cat Sandoval
March 17, 2021
The suspect has said his crimes were not racially motivated, but police haven't ruled out that it may have been a hate crime.
SHOW TRANSCRIPT

For Asian American and Pacific Islander -- or AAPI -- women, the Atlanta shooting is worrisome because it hits home: six of the eight victims look like them.

Rose Nguyen, founder and head chef at Rose Ave Bakery described it as "sickening, saddening, and then all of that turns into anger because simply I'm tired of this and tired of the violence."

"This morning I was in the shower and I just started crying. I thought, I can't keep my parents safe. I can't keep my community safe, I'm scared," said Joo Han, deputy director of advocacy group Asian American Federation.

"My initial reaction was just tremendous grief. Yeah, it was painful. It was painful to learn about the news," says Catherine Ceniza Choy, professor of ethnic studies at the University of California.

Although the suspect says it's not race-related, officials are still investigating and have not ruled out a hate crime.

Chief Rodney Bryant of the Atlanta Police Department said: "Is this a hate crime? We are still early in this investigation, so we cannot make that determination at this moment."

A new report from Stop AAPI Hate says they received nearly 3,800 reports of hate incidents since the start of the pandemic, the majority of which were women.

"These attacks happen to majority of Asian women. It is what it is. ... The demographics are who they are. Happened among this time when Asian crimes are on the rise," said Nguyen.

Bakery owner Rose Nguyen says she been on high alert.

As a reaction to the shooting Tuesday, New York City and Seattle police departments increased patrols in their Asian American communities.

"The fact that these Asian-owned businesses were targeted and that the majority of victims were Asian lets us know that there still is a threat to our safety, to our physical and mental and emotional safety that we need to address as a community," said Han.

The Asian American Federation is pushing for more community outreach instead of more policing because of fears it may create more harm for unprotected immigrant populations.

As politicians, communities and the media continue to address the anti-Asian violence and attacks, historian Catherine Ceniza Choy there're so many more layers to this.