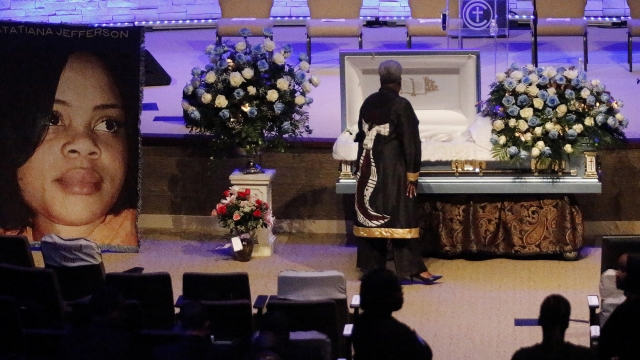 SMS
Atatiana Jefferson's Father Dies Of Heart Attack
By Adam Elrashidi
By Adam Elrashidi
November 11, 2019
Marquis Jefferson, the father of a woman killed in her home by police last month, has died of a heart attack at the age of 58.
SHOW TRANSCRIPT

Marquis Jefferson, the father of a Texas woman who was killed by police last month, died of a heart attack on Saturday. He was 58.

Atatiana Jefferson died in her home after a white Fort Worth police officer shot her through a closed window during a welfare check. The officer, who has since resigned from the police department, has been charged with murder.

A Jefferson family spokesperson told The Washington Post that Marquis Jefferson was not sick before the heart attack but had been "overcome with grief" since his daughter's death.

The spokesperson said: "When you heard him talk about his daughter, you thought he was coping well because he always tried to have a smile. But in the last three weeks, he just started wearing down day after day; he wasn't his perky self. I didn't know what a broken heart meant, but I feel like I've really witnessed a broken heart."

It's not clear if so-called "broken heart syndrome" contributed to Marquis Jefferson's death. But the news highlights the emotional and physical toll often paid by the survivors of police violence. Police are almost three times more likely to kill black Americans than white Americans. And one study published in The Lancet found these killings may lead to higher rates of self-reported depression, stress and other mental illness in black communities.

In 2016, 63-year-old Venida Browder died of what her family called a broken heart more than a year after her son Kalief Browder died by suicide. She became an advocate for prison reform following her son's incarceration, which drew national attention to the issues of juvenile detention and solitary confinement.

Erica Garner became an activist against police brutality after her father died at the hands of police in 2014. She died in 2017 after an asthma episode caused a major heart attack. She was 27-years old.

Christen Smith is a professor of African and African Diaspora and anthropology at the University of Texas at Austin. She told The New York Times that such deaths represent "the fallout of police violence."

She said: "It is a kind of deep sense of utter loss that is killing people. ... The deaths of these family members are a sequela, a disease you develop in response to another disease. Family members are dying in the wake of these killings, and we are not paying attention to this."