At The Kentucky Derby, Can Nyquist Be This Year's American Pharoah? 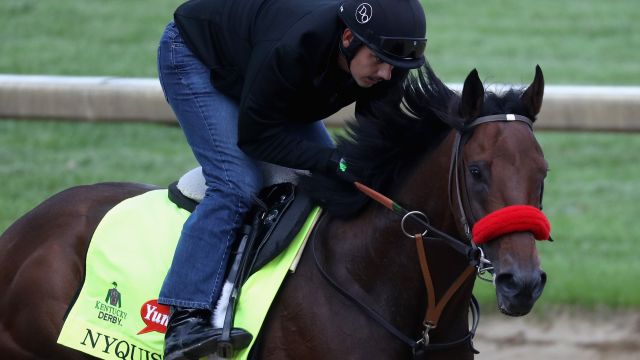 This year's favorite, Nyquist, starts in a favorable pole position, but the memory of American Pharoah's historic run still lingers.

Could Nyquist be this year's American Pharoah?

At the Kentucky Derby on Saturday, Nyquist begins the pursuit of the Triple Crown in Louisville. He's the favorite at 3-1 odds Thursday.

Nyquist is a perfect 7-0 and will set up in the No. 13 post position, the same post he broke from to win the Breeders' Cup Juvenile last year.

"He's a playboy. He knows he's good, and he likes to flaunt it a little bit," Nyquist's trainer Doug O'Neill said.

"How often have you have you had a horse you called a playboy?" another reporter asked.

Behind Nyquist at 8-1 odds sits Exaggerator, also in a favorable pole position.

The horse that wins this year will have some big shoes to fill after American Pharoah's historic Triple Crown run last year. It was the first time we had a Triple Crown winner since 1978.

While Pharoah enjoys the retired life at a ranch about an hour and a half east of the races, his former trainer, Bob Baffert, will be watching another take the track.

This video includes clips from Churchill Downs Inc. and NBC Sports and images from Getty Images.

The horse's owner said they will use the time for Rich Strike to rest before the Belmont Stakes next month.